Here are the SmackDown results for the 5th of August, 2022.

Shinsuke Nakamura will take on Ludvig Kaiser and if the Japanese star wins, he will get an opportunity to face Gunther for the Intercontinental Championship. Natalya, Aliyah, Shotzi, Raquel Rodriguez, Shayna Baszler, Sonya Deville, and Xia Li will compete in a gauntlet match to determine the next challenger for Liv Morgan’s SmackDown Women’s Championship.

Pat McAfee said it was an honor to be on the SummerSlam card. He will not forget the ball-kicking he gave to Happy Corbin for the rest of his life. Backstage, we saw many superstars laughing at Corbin. Ricochet was among them. He said that karma is a beautiful thing. Corbin said that he will wipe the smile off his face. Ricochet challenged him to a match and Corbin agreed.

Ricochet and Happy Corbin went back and forth. Shooting Star Press from Ricochet earned him a two-count. Corbin delivered a back elbow.

Ricochet blocked a chokeslam and delivered a hurricanrana. In the end, McAfee stood up and taunted Corbin. Ricochet took advantage of the distraction and delivered a Shooting Star Press to get the pinfall victory.

Backstage, Sami Zayn was seen knocking on the door of Roman Reigns’ locker room suite while sporting a big smile. We went into a commercial break.

Upon returning, we see The Usos coming out of Reigns’ locker room. Sami says that The Usos were great at SummerSlam. He asked how Paul Heyman was doing. The Usos informed him that Heyman needed a few nights off to recover from the F5 that Brock Lesnar hit him with.

Zayn asked why Heyman didn’t reply to his texts where he told him that he will come to check on Reigns on the show. The Usos told him that it wasn’t a great time to meet the Tribal Chief. They assured Zayn that they will drop a text message when they feel the time is right. Zayn said he will come back later. The Usos returned to Reigns’ locker room as Zayn looked on with a concerned look on his face.

Shinsuke Nakamura went for a Kinshasa but Ludwig Kaiser stopped him in his tracks and hit a running European uppercut. Kaiser followed up with a modified German Suplex to get a near fall.

In the end, Nakamura hit his opponent with a roundhouse kick and followed it up with a Kinshasa to pick up the all-important win.

Megan Morant interviewed Kofi Kingston backstage. Kingston revealed that Woods is doing great after being assaulted last week by The Viking Raiders. It’s just a matter of time before he returns to SmackDown. Kingston said that he will make The Viking Raiders pay for their actions.

Sami Zayn knocks on Reigns’ locker room door once again. The Usos came out and said they were just about to text him. They told Zayn that usually, Heyman goes to the production truck to check if Reigns’ music, graphics, and entrance is perfect, however, he isn’t here tonight. The Usos asked Zayn to step in. Zayn was hesitant as it wasn’t his job. He is the Honorary Uce. The Usos said that it will make Reigns happy. Zayn said he will do the needful. McAfee and Michael Cole talked about Reigns addressing Drew McIntyre later on in the night.

Liv Morgan makes her way to the ring

The SmackDown Women’s champion had her left arm in a brace. Fans chanted “you tapped out!” and Liv said she appreciates them for calling her out on her shit. Liv says the title means everything to her and that is why she fought through a series of armbars. Liv said that she tapped out only after the referee counted to three as the fans booed her. Deville came out and said that Liv shouldn’t be the champion.

Deville said she was happy that Rousey got her hands on Liv after she screwed her. The former Absolution member said it’s a testament to how bad Adam Pearce sucks at his job.

Deville ended the promo by saying that she will win the Gauntlet match tonight and go on to break Liv’s heart by taking the title from her at Clash at the Castle.

Sonya Deville and Aliyah got us underway. Aliyah and Sonya Deville traded blows. Deville weathered the initial storm from Aliyah and hit the Deville’s Advocate to pick up the win and advance.

Raquel Rodriguez comes out to take on Deville. The heel hit a chop block to take on Rodriguez. Deville plants Rodriguez face-first. However, Rodriguez fought back with a spinning elbow drop from the ropes and eventually got the win after delivering a Texana Bomb.

Shotzi makes her way to the ring. She blocked an attempted slam and turned it into a tornado DDT. However, Raquel didn’t take much time to defeat Shotzi as she hit another spinning elbow drop and followed it up with a Texana bomb to advance.

Xia Li was up next. She dished out some heavy blows to Rodriguez. The Chinese star applied a half-Boston Crab. More shots to the knee followed. Repeated strikes from Li fired up Rodriguez. In the end, Rodriguez hit a spinning elbow drop and a Texana Bomb to move one step closer to challenging Liv Morgan.

The veteran Natalya came out to the ring. She took control of proceedings and applied a submission hold to wear down Rodriguez. The youngster tried to hit a few right hands to unsettle Natalya but the former Divas champion locked in a Sharpshooter. Rodriguez managed to make it to the ropes. Natalya began assaulting Rodriguez in the corner but the latter used her strength to lift the experienced campaigner and delivered a Texana Bomb to get the win.

Shayna Baszler made her way to the ring. She took advantage of a worn-out Rodriguez who was fighting on one leg due to chop blocks she endured from Natalya and Deville. Rodriguez hit the spinning elbow but Baszler countered into the Kirifuda Clutch. Eventually, Baszler got the roll-up to secure victory and become the no.1 contender for the SmackDown Women’s Championship.

Sami Zayn once again stands outside Reigns’ locker room door. The Usos are not happy with him. They have all the titles and had a great SummerSlam. It’s time Zayn started pulling his weight or else, they will have to take off The Bloodline shirt he is wearing.

The Viking Raiders versus Tommy Gibson and Jim Mulkey

The heels made light work of the enhancement talents. They used a number of double-team moves to pick up an easy win without breaking a sweat.

After the match, Kofi Kingston attacked the heel duo with a kendo stick.

Kofi Kingston came out of the blocks quicker and hit a few rights to the heel. However, Erik slammed Kingston down and followed up with a lethal knee strike. Erik applied a headlock to wear down Kofi. The former WWE champion fought back and delivered a crossbody for a near fall.

Ivar tried to hit Kofi with a kendo stick but the latter evaded. Erik took advantage and hit a huge right hand. Back in the ring, Kofi got the win following a roll-up.

Roman Reigns came out to the ring flanked by The Usos. He said that he hated Brock Lesnar for assaulting the Wise Man – Paul Heyman.

Drew McIntyre made his way to ringside and called Reigns “Tribal Queef”. He had heard enough. He asked the WWE Universe to scream if they wanted him to take out The Bloodline tonight.

However, Karrion Kross appeared out of nowhere and assaulted the Scottish Warrior. After taking out McIntyre, Kross looked at Reigns with intent. Scarlett Bordeaux came to ringside and placed an hourglass inside the ring to symbolize that the clock has started ticking. A warning for Reigns. 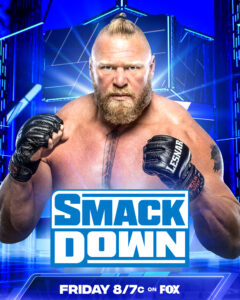