WWE Raw results and winners: Some major events transpired after Money in the Bank

The first RAW after Money in the Bank turned out to be a blockbuster one, with big names returning to WWE. We also saw a dramatic Championship match, on a Monday night which welcomed back fans for the first time in more than a year. We take a look at the WWE Raw results on the July 19th edition.

With big names returning, it made for a superb episode with SummerSlam in over a month’s time. Will more rivalries brew in the next few weeks on Monday Night Raw?

Charlotte Flair and Rhea Ripley’s rivalry did not seem to stop after Flair became the new champion at Money in the Bank. With tensions flaring, it was decided that the main-event would be a rematch for Ripley, who was the champion since WrestleMania 37.

The match went back and forth, with both competitors looking close to a victory. Flair, gave it her all in her first title defense, but chose the easy route hitting Ripley with the title belt. The disqualification gave Ripley the win, but Flair remained the champion.

After the match, the brawl continued with Ripley delivering the Riptide on Flair outside the ring. This invited Nikki A.S.H sprinting towards the scene with a cash-in attempt. She delivered a crossbody on an injured Flair to give her the shocking win and crowing her the new RAW Women’s Champion.

Keith Lee made his return to RAW, after missing out for half a year. He immediately returned to confront WWE Champion Bobby Lashley. Lashley retained the title after beating Kofi Kingston at Money in the Bank, but was already given a new challenge within 24 hours.

Lashley secured the win on the night, but was stunned when the sudden intro music of Goldberg played. WWE legend Goldberg made his shocking return confronting Lashley and saying “I’m Next!” to a huge cheer from the crowd.

Jeff Hardy made his return to RAW, after months of recovering from injury. He returned and immediately came face to face with a new debutant in the form of Karrion Kross. The NXT Champion finally made his debut, but found it hard to find his feet in his first match.

Hardy was matching Kross throughout the match, and eventually got one over him with a jackknife pinfall victory.

This could be the start of a new era for Kross, who has been a dominant brand on NXT for the last few months.

Cena began the episode to a huge pop from the entire arena. The atmosphere was electrifying as Cena returned to explain his return after a huge absence.

Cena said he came back for the WWE Universe, to become Universal Champion and to shut up Reigns. Cena even went on a lengthy rant calling him “an asshole” who was overhyped and overexposed.

There were other tag-team and single matches on RAW, in an exhilarating episode on Monday night. Some of the matches include: 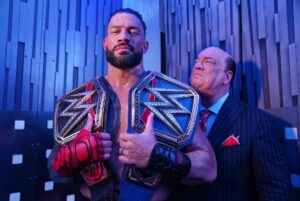 Shinsuke Nakamura posts behind the scene photo with John Cena