Manchester United are set to turn their attention back to the Premier League with a trip to East London to face West Ham on Saturday.

The Red Devils suffered a 3-1 defeat at the hands of Paris Saint-Germain in a crucial Matchday 5 fixture in the group stages of the Champions League on Wednesday night. United completed a remarkable comeback to beat Southampton 3-2 in their previous league fixture and a win at the weekend could see Ole Gunnar Solskjaer’s side break into the top four.

United, though, are expected to face a tough test against an in-form West Ham side that have won 5 of their opening 10 league fixtures so far.

Marcus Rashford picked up a minor shoulder niggle in the defeat to PSG and is slightly doubtful to start on Saturday. Luke Shaw (thigh) could also miss the trip to the English capital while Phil Jones remains a long-term absentee for the Red Devils.

The Spaniard was passed fit to play in the Champions League fixture and should retain his place in the starting XI for the weekend clash.

The youngster did a good job defensively against PSG but will be expected to contribute more in terms of attack in the next game.

The England international had a difficult outing in the midweek Champions League tie but has always been an undisputed starter at the back for the Red Devils.

The Swede looked far too sluggish against PSG and will need to step up his game when United make the trip to West Ham.

The Brazilian international looked defensively suspect in the last game but is likely to retain his place if Shaw doesn’t recover in time for the weekend clash.

The academy graduate was one of the standout performers in the 3-1 defeat to PSG and will be expected to continue his good work when United face the Hammers.

The Frenchman hasn’t always been a regular starter for United this season but Solskjaer should give him the nod ahead of Fred for this one.

The former Ajax star has started only once in the PL this season but he could find himself in the mix this weekend, with Rashford doubtful to play a part.

The Frenchman was quite wasteful with his finishing against PSG and will be expected to raise the bar on Saturday.

United will rely heavily on their main creative weapon to deliver the goods in the final third after a pretty average display on Wednesday.

The Uruguayan masterminded United’s remarkable comeback against Southampton with a superb brace last week and could once again hold the key to the team’s success. 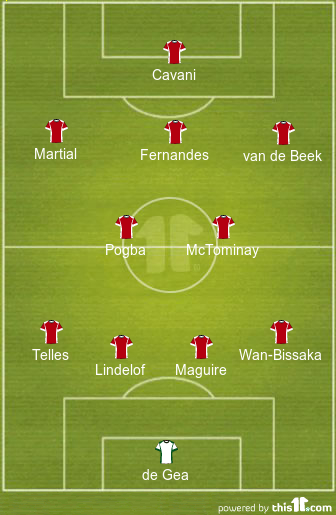