The Europa League is set to return with yet another round of intriguing fixtures as Celtic make the trip to the San Siro to face AC Milan on Matchday 5 of the competition on Thursday.

Neil Lennon’s side currently find themselves rock bottom of Group H, having lost three of their four games so far. Milan, on the other hand, are just one point behind leaders Lille and will be confident of coming away with all three points from the fixture, having beaten the Hoops 3-1 in their opening group game back in October.

A dismal run of form in recent weeks has seen Celtic win just two of their ten games in all competitions and they will need to raise their standards on Thursday to appease a furious fanbase.

Mikey Johnston (knee) and James Forrest (ankle) are both ruled out for the Europa League clash while Leigh Griffiths (knee) remains doubtful to play a part. David Turnbull is yet to recover fully after testing positive for Covid-19 recently.

The Greek international wasn’t at fault for any of the goals he conceded in the 2-0 defeat against Ross County in the Betfred Cup and deserves to retain his place in the side.

Elhamed failed to grab his opportunity against Ross County and Lennon would be better off reinstating the youngster in the starting XI for the Europa League clash.

The Frenchman has looked a tad rusty after returning from his injury but he needs regular playtime to regain his sharpness.

The Norwegian has been well below par in recent weeks and could have his work cut out against a potent Milan attack.

The Uruguayan international has been a rare bright spark amid a collective defensive failure at Celtic in recent weeks. He should definitely retain his place in the side.

The veteran put in a solid shift in the Betfred Cup defeat against Ross County. Remains an invaluable cog in the Hoops’ engine room.

The academy graduate only played a cameo off the bench in the previous game but is likely to return to the mix for the trip to Italy on Thursday.

The Southampton loanee failed to make much of an impact off the bench in the last game but he remains a key player in the final third for the Hoops.

The playmaker was nowhere near his best in the 2-0 defeat against Ross County. Will be expected to put in a better shift in the Europa League clash.

Rogic failed to grab his chance in the last game and Lennon should hand Ntcham a start in this one.

The talismanic hitman has struggled to hit top gear following his return to the side and the fans will be expecting him to step up his game when Celtic take on Milan. 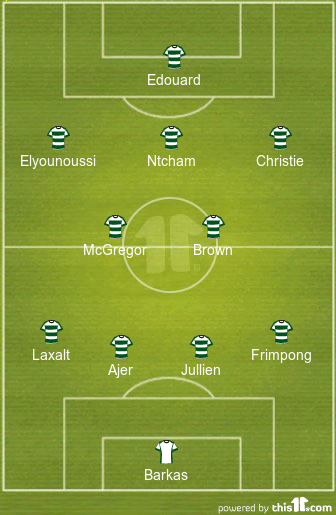