Rangers squandered a two-goal lead to settle for a 2-2 draw against Benfica at Ibrox on Matchday 4 of the UEFA Europa League. The result saw the Gers stay level on points atop Group D and take a step closer to knockout qualification.

Steven Gerrard’s side are now set to turn their attention to the Scottish League Cup with a second-round tie away at League One leaders Falkirk on Sunday. Rangers are currently unbeaten in 22 games in all competitions this season and will be the outright favourites to progress to the next stage of the competition against the minnows.

Gerrard doesn’t have any significant injury concerns heading into the weekend trip to Falkirk. Midfielders Ryan Jack and Bongani Zungu were absent from the Europa League matchday squad on Thursday and are unlikely to play a part in the League Cup tie. Nikola Katic remains a long-term absentee for the Gers.

The former Sunderland man has largely served as the understudy to McGregor between the sticks but he could get a look in for the League Cup tie on Sunday.

The skipper was unlucky to have scored an own goal on Thursday night. He has otherwise been in excellent form this season and should start at the weekend unless Gerrard opts for some rotation.

The former Brighton man has been an undisputed starter under Gerrard and should retain his place in the side for the League Cup fixture.

The Swedish international didn’t feature in the Europa League game but is likely to replace Balogun on the teamsheet for this one.

The former Leicester City starlet has looked impressive whenever he has been afforded an opportunity and should replace Barisic for Sunday’s cup tie against Falkirk.

The veteran played the full 90 minutes against Benfica but he could be retained in the side for the cup tie with Jack and Zungu out injured.

The Nigerian hasn’t always been a regular starter for the Gers but Gerrard should definitely give him a go for the weekend trip to Falkirk.

The academy prospect has been a part of several matchday squads this season without making an appearance and the League Cup fixture could finally see him get some action.

The Romanian has slipped down the pecking order in recent weeks but is likely to start ahead of Roofe on Sunday.

The former Birmingham City man has struggled for regular minutes but he could be back in the mix this weekend.

The veteran has only played a bit-part role this season but has clearly shown that he’s still capable of delivering the goods. 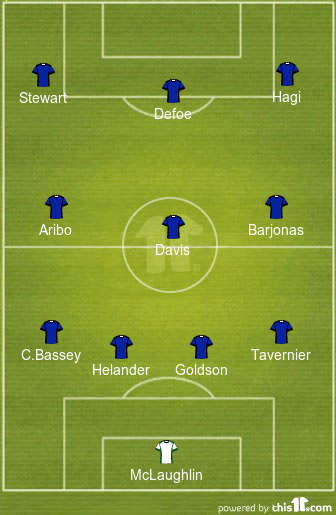