Celtic crashed out of the Europa League after a second straight 4-1 defeat at the hands of Czech outfit Sparta Prague on Thursday night. Neil Lennon’s side are now set to turn their attention to the Scottish League Cup with a second-round tie against Ross County at home on Sunday.

The Hoops absolutely hammered Ross County 5-0 in the Scottish Premiership back in September and will once again be the outright favourites to overcome Stuart Kettlewell’s side this week. Celtic, though, will be under some kind of pressure, having won only 3 out of their last 10 fixtures across all competitions.

Christopher Jullien and Hatem Abd Elhamed their comeback in the Europa League defeat but James Forrest (ankle) and Mikey Johnston (knee) are yet to recover from their respective injuries.

The Greek international has lost his No.1 status between the sticks but he deserves a look in for the League Cup tie after Bain’s dismal display in the Europa League.

Elhamed made a solid return to action in the last game but the former Man City youngster could start on Sunday if Lennon opts for rotation.

The Frenchman was far from his best against Sparta Prague on his return from injury but Lennon needs to back him with regular starts to help him regain match fitness.

The Norwegian was caught out of position several times in the 4-1 Europa League defeat and will be expected to put in a better shift at the weekend.

Laxalt has had a consistent run of games on the left, so Lennon might just look to hand the Scotsman an opportunity for the League Cup game.

The Celtic skipper has been well below par in the last few games but Lennon hasn’t really got a lot of cover in that holding midfield role.

He wasn’t at his best on Thursday and Celtic will certainly need him to contribute more if they are to overcome Ross County this weekend.

Lennon should hand the youngster an opportunity on Sunday, with Ntcham and Rogic both struggling to cement themselves in the No.10 role.

The Southampton loanee has often lacked consistency this season and drifted in and out of the game against Sparta Prague. Celtic will need him to be at the top of his game in the League Cup.

His playmaking wasn’t quite up to the mark on Thursday but he remains a key cog in the Hoops’ attack.

The French talisman showed signs of returning to his best with a neat finish against Sparta Prague and the fans will be hoping for him to continue his good work. 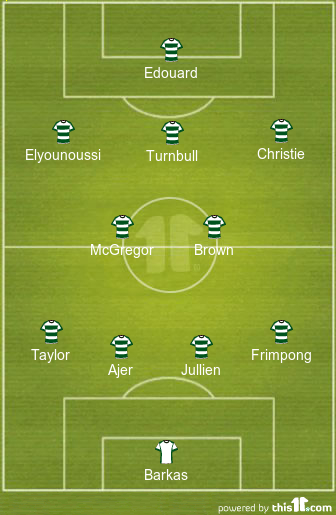