Celtic faced a stern test against Hibernian in the Scottish Premiership on their return from the international break but eventually managed to salvage a point at Easter Road, forging a late comeback to wipe out a two-goal deficit.

The Hoops are now set to turn their attention to the Europa League with a trip to the Czech Republic to face Sparta Prague on Matchday 4. Celtic are currently bottom of Group H after failing to win any of their first three games in the competition, effectively making Wednesday’s fixture a do-or-die clash for the Scottish champions.

Neil Lennon’s side were beaten comprehensively by Sparta Prague at Celtic Park earlier in the month. The pressure will be on them to turn the tables this time around.

Celtic will miss the services of James Forrest (ankle), Christopher Jullien (back) and Mikey Johnston (knee) heading into the midweek Europa League trip. Apart from that, Lennon is expected to have a fully fit squad at this disposal.

The Scotsman put in a brave shift between the sticks in the 2-2 draw against Hibernian at the weekend and should retain his place in the starting XI.

The youngster has struggled defensively in recent weeks but Lennon hasn’t really got a lot to choose from in that department.

The Brighton loanee only came off the bench in the last game but is likely to replace Nir Bitton on the teamsheet after a poor display from the Israeli at the back.

The Norwegian starlet remains one of the key cogs in Celtic’s backline. He is expected to start against Sparta Prague on Wednesday.

The Uruguayan saved the blushes for the Hoops with an injury-time equaliser against Hibernian and Lennon should continue to back him with regular starts.

The veteran hasn’t been at the top of his game in recent weeks but Lennon doesn’t have too many alternatives to challenge him for a spot in the side.

The Hoops graduate remains an indispensable component of the club’s engine room with his creativity and work rate.

The Southampton loanee was far from his best in the draw against Hibernian and will be expected to pull up his socks for the Europa League clash.

He was one of the standout performers for the Hoops in the previous fixture and will once again be tasked with creative duties on Wednesday.

The Frenchman has often struggled for form this season but could get a look in for the Europa League game ahead of Tom Rogic if Lennon opts to rotate his options.

He played an impressive cameo off the bench in the 2-2 draw at Easter Road and is likely to replace Ajeti on the teamsheet for the midweek clash. 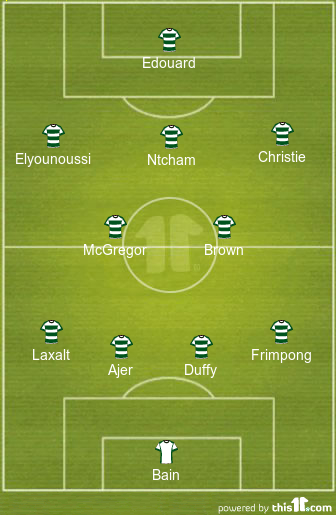