Rangers returned to action following the international break with a 4-0 demolition of Aberdeen in the Scottish Premiership on Sunday, thanks to goals from Ryan Kent, Kemar Roofe, James Tavernier and Scott Arfield.

Steven Gerrard’s side are now set to turn their attention to the Europa League by playing host to Benfica on Matchday 4. Both teams are level on points atop Group D, having played out a 3-3 draw in Portugal earlier in the month.

The Gers are currently unbeaten in 21 games across all competitions this season and they will be looking to capitalise on Benfica’s ongoing Covid crisis to take a step closer to knockout qualification.

Rangers don’t have any major injury concerns heading into Thursday’s Europa League clash against Benfica. Gerrard has confirmed that Ryan Jack could miss the fixture due to a knee injury while Bongani Zungu and Nikola Katic have also been ruled out.

The veteran remains an epitome of reliability for the Gers between the sticks and should definitely start against Benfica on Thursday.

The skipper has been a key contributor with goals and assists from the right side and will be high on confidence after converting from the penalty spot in the 4-0 thrashing of Aberdeen.

The former Brighton man put in yet another solid shift at the heart of the defence in the previous fixture and is likely to retain his place in the starting eleven.

The Swedish international was on the bench against Aberdeen but could replace Balogun on the teamsheet if Gerrard opts for a slight rotation at the back.

The Croat continues to be a key outlet for the Gers with his precise deliveries from the left and should start once again on Thursday.

The Northern Ireland veteran only played a cameo off the bench in the previous fixture against Aberdeen. But he is expected to start the Europa League tie in the absence of Jack.

The Finnish international remains a key cog in the Gers’ engine room. He is likely to return to the starting XI against Benfica after playing as a substitute at the weekend.

The Canadian was one of the standout performers for Gerrard’s side in the 4-0 win over Aberdeen. He should retain his place in the starting XI.

The former Liverpool man will be high on confidence heading into the Europa League game after scoring his 5th league goal for Rangers at the weekend.

The Romanian prodigy has somewhat slipped down the pecking order in recent weeks but could return to the mix on Thursday if Gerrard opts to rotate his players.

The Colombian bagged a goal and an assist in the Gers’ 3-3 draw against Benfica on Matchday 3. He will once again hold the key to their success at Ibrox this time around. 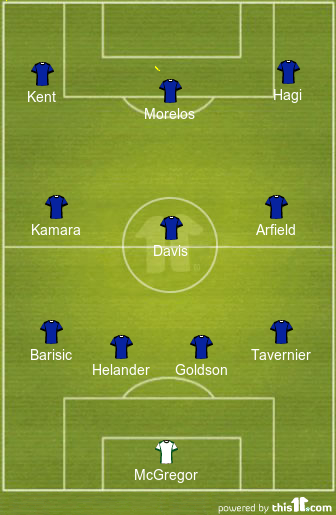