Predicted Rangers XI to face Hamilton in the Scottish Premiership

Rangers squandered a two-goal lead to settle for a 3-3 draw against a 10-man Benfica side on Matchday 3 of the UEFA Europa League on Thursday night. Steven Gerrard’s side will now turn their attention back to the Scottish Premiership with a home fixture against Hamilton Academical on Sunday.

The Gers are currently nine points clear of arch-rivals Celtic atop the domestic standings, having played two extra games. Rangers are still unbeaten in 19 games across all competitions this season. The Ibrox giants will be fancying their chances of heading into the second international break on a positive note this weekend.

Hamilton are currently rock bottom of the table, having won just 2 of their 11 league games so far this season.

Steven Gerrard doesn’t have any major injury issues to contend with heading into the weekend home fixture against Hamilton. Nikola Katic remains the only long-term absentee for the Gers with a cruciate ligament injury. Jordan Jones and George Edmundson are both self-isolating after violating Covid-19 guidelines in a party and will not be available for selection.

The veteran wasn’t at fault for any of the three goals conceded in the Europa League game. Has always been a figure of reliability between the sticks for the Gers.

The skipper continued his rich vein of form this season with yet another delicious assist against Benfica in the midweek fixture.

The former Brighton man has been one of the most consistent performers for Rangers at the back this term. He scored an own goal in the last game but that was more unfortunate than anything else.

Helander had a really poor outing in the Europa League tie and Gerrard should rotate his squad to hand the Nigerian an opportunity on Sunday.

The former Leicester City starlet has shown strong signs of promise and deserves a look in from the manager at the weekend.

He was certainly among the standout performers for the Gers in the 3-3 draw against Benfica. Remains a key cog in the club’s midfield engine.

The Finnish international capped off yet another top-notch performance with a well-taken goal in the Europa League and should definitely start on Sunday.

The Canadian only played a cameo off the bench on Thursday but is likely to replace Davis on the teamsheet if Gerrard opts for some rotation.

The Romanian playmaker hasn’t played a part in the last two games. Surely deserves to return to the starting XI this weekend.

The former Liverpool star was unlucky not to have found the net against Benfica as he hit the post. But he will be hoping to add to his goal tally in the upcoming fixture.

The ex-Leeds United star has largely played second-fiddle to Morelos this season but the fixture against bottom-table Hamilton could offer a good opportunity for him to impress. 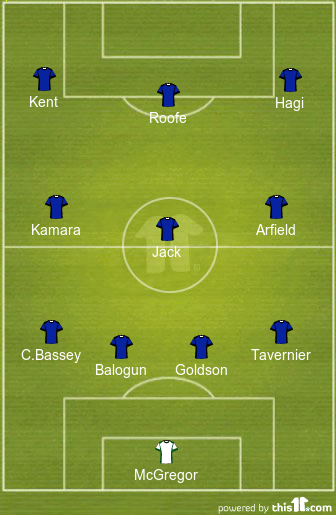