Predicted Celtic XI to face Motherwell in the Scottish Premiership

Celtic suffered a humiliating 4-1 defeat at home against Sparta Prague on Thursday night to leave them on the brink of Europa League elimination. The Hoops are now set to turn their attention back to the Scottish Premiership with a trip to Fir Park to face Motherwell on Sunday.

The reigning Scottish champions are currently 9 points behind arch-rivals Rangers atop the standings, although they have two games in hand. Celtic have won only one of their last six fixtures in all competitions and they will be under pressure to get their campaign back on track against Steve Robinson’s side.

Neil Lennon has a few injury concerns heading into the weekend trip to Motherwell. Christopher Jullien (back), Kristoffer Ajer (groin), James Forrest (ankle) and Mikey Johnston (knee) are all ruled out.

He made several good saves in the Europa League tie and was hardly to blame for any of the goals conceded in the 4-1 defeat at home.

The youngster was caught out of position defensively on numerous occasions against Sparta Prague. Will be expected to put in a better shift on Sunday.

The Irishman had yet another nightmarish outing against an energetic forward line in the midweek fixture but is likely to retain his place.

Bitton was well below par in a collective defensive collapse at Parkhead on Thursday. Lennon should hand his Israeli star an opportunity against Motherwell.

The Uruguayan was perhaps the least to blame for Celtic’s backline circus in the Europa League but will surely need to improve at the weekend.

The veteran had little to no impact as Sparta Prague ran riot at Celtic Park but he remains a key cog in the club’s midfield engine.

The Hoops graduate had a rare bad day at the office on Thursday but that isn’t enough to raise questions over his role in the side.

The playmaker was far from his sparkling best in the humiliating midweek defeat but has always been a key contributor for Celtic with goals and assists.

The Frenchman only played a cameo off the bench in the last game but could return to the starting XI to replace Rogic if Lennon opts for some rotation.

The Southampton loanee will be under pressure to come back strongly after a dismal performance in the Europa League debacle.

Edouard looked short of match fitness in the last game. Lennon should hand the in-form Swiss international a chance to impress on Sunday. 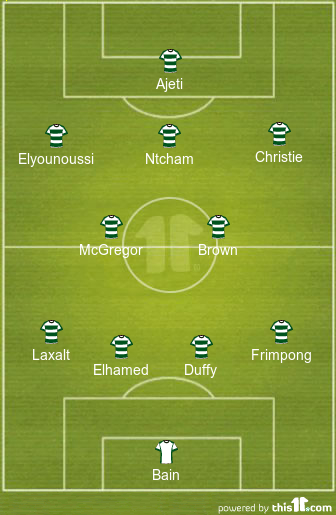