In Sunday’s late kickoff, Arsenal take on Aston Villa in the Premier League. The Gunners look in really good shape ahead of the game, with 3 consecutive wins behind them. They nicked past Manchester United last weekend and it would give them a lot of confidence going into this game.

Meanwhile, Villa aren’t doing great. They are coming on the back of two losses against Southampton and Leeds, with their last win coming against Leicester back in mid-October. Mikel Arteta’s men are very well expected to take this one home.

Gabriel Martinelli is still out for a while due to injury. Calum Chambers and Pablo Mari are slowly edging towards a return. Reiss Nelson is a doubtful name too. However, some good news would be the return of David Luiz.

Leno has played almost all of their games this season and is expected to keep his place between the sticks.

Returns to his left-sided role in defence after being rotated for the last game and only playing the last 10 minutes.

With Luiz back, he will likely return to the backline and start on the right-hand side of the three-man defence.

Rested for the midweek but should resume his duties this weekend. The Brazilian has been a solid presence at the back so far.

Replaces Ainsley Maitland-Niles who played the Europa League fixture. Should be back to his wing-back role.

What a signing this man has been. He looks effortlessly good in this side and has made a real difference since joining.

The Egyptian has been a revelation this season after spending time away from the club. His pressing and energy will be vital.

Saka returns to his station after some rest in the midweek.

The captain will be happy after netting the winner versus Manchester United. It would have given him a lot of confidence which he needed at the time.

The senior Frenchman takes over from Eddie Nketiah for this one.

Willian might get the nod for this one but he sure will be under pressure to deliver, especially with Pepe picking up steam and making a case to start. 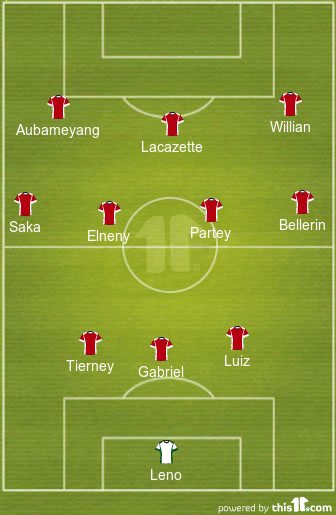