Chelsea romped home to an emphatic 3-0 win over Stade Rennes on Matchday 3 of the UEFA Champions League, thanks to Timo Werner’s brace from the penalty spot followed by Tammy Abraham’s second-half strike.

Frank Lampard’s side are now set to turn their attention back to the Premier League with a home fixture against Sheffield United on Saturday. The Blues are currently placed 7th in the standings and will be looking to continue their winning ways after beating Burnley 3-0 last week.

Meanwhile, Sheffield United are currently languishing in the relegation zone after losing 6 of their 7 opening league fixtures so far and Chris Wilder’s side will be up against it when they make the trip to the English capital this weekend.

Kai Havertz is currently self-isolating after testing positive for Covid-19 and will not be available. Christian Pulisic has been ruled out with a hamstring problem while Billy Gilmour remains a long-term absentee for the Blues with a knee injury.

The Senegalese international made an excellent late save to keep yet another clean sheet in the 3-0 win over Rennes in the Champions League.

Reece James has been quite fantastic in the last two games but Lampard might as well rotate his squad to give him some rest and bring the captain back into the starting XI.

The Brazilian veteran put in another calm and composed shift at the heart of the defence on Wednesday night. Should start once again on Saturday.

The Frenchman followed up his goal against Burnley last week with another tidy performance in the Champions League. He definitely deserves to retain his place against Sheffield United.

The England international has already made a massive impact since his arrival in West London, adding a lot more quality to Chelsea’s left channel.

The Italy international looked quite sloppy with his passing against Rennes and will be expected to put in a better shift on Saturday.

The World Cup winner did a decent job in the Champions League game before being substituted in the second half. He should be fresh and ready to start at the weekend.

The Croatian has had very little game time so far this season. Lampard should hand him a start ahead of Mount, who deserves a breather.

The Moroccan was quite unstoppable against Burnley last week but looked quite ordinary in the midweek Champions League clash. However, Lampard should continue to back him with regular starts.

The teenager is not among the first names on Lampard’s teamsheet but he could get a chance to impress on Saturday if the manager rotates his squad.

The German talisman will be high on confidence after scoring twice from the penalty spot in the last game. 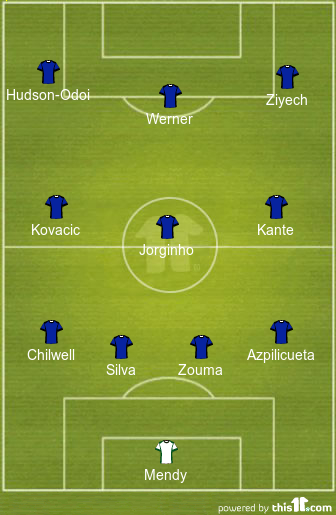