Celtic kept their hopes of a quadruple-treble alive with a comfortable 2-0 win over Aberdeen in the semi-final of the Scottish Cup on Sunday, thanks to goals from Ryan Christie and Mohamed Elyounoussi.

Neil Lennon’s side are now set to turn their attention to the Europa League with a home fixture against Sparta Prague on Matchday 3. Celtic lost 3-1 against AC Milan in their Group H opener before coming away with a crucial point in a 2-2 draw against Lille last week.

Meanwhile, Sparta Prague are currently bottom of the group, having lost both their opening group fixtures so far. The Hoops will be the outright favourites to secure all three points on Thursday night after ending their 4-game winless streak last time around.

Hatem Abd Elhamed returned from injury in the last game but Christopher Jullien (back) and James Forrest (ankle) are still ruled out. Mikey Johnston (knee) remains a long-term absentee for the reigning Scottish champions.

He followed up a brilliant display between the sticks in the 2-2 draw away at Lille with a deserved clean sheet in the Scottish Cup semi-final and should retain his place in the starting XI.

The former Man City starlet put in a lively shift against Aberdeen last time around and should once again find himself among the starters.

The Brighton loanee showed signs of returning to his best in the previous outing after a few lacklustre displays. Will be expected to continue his good work on Thursday.

The Israeli international looked calm and composed in the 2-0 victory over Aberdeen and definitely deserves to start the Europa League tie.

The Uruguayan seems to be improving with each passing game and Lennon should continue to back him with regular starts.

The veteran put in yet another calm and composed shift in the middle on Sunday. Will be expected to do the same when Celtic play host to Sparta Prague.

The Hoops graduate remains a vital cog in the club’s midfield engine with his energy and creativity.

The Norwegian international will be high on confidence heading into the midweek European tie after scoring thrice in his last two outings.

The Australian bagged both assists in Celtic’s 2-0 win over Aberdeen. Lennon should hand him another start ahead of Ntcham on Thursday.

The playmaker made all the difference in the Scottish Cup semi-final win with a superb curling effort. Celtic will once again rely heavily on him to deliver the goods.

The Frenchman hasn’t quite been at his sparkling best since recovering from Covid-19. But he remains the undisputed first-choice No.9 for the Hoops. 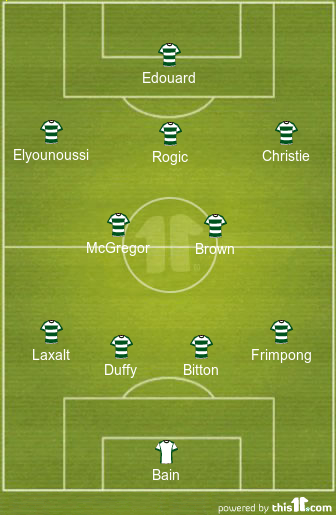