Rangers stretched their winning run to nine games in all competitions with a hard-fought 1-0 win over Kilmarnock in the Scottish premiership on Sunday, thanks to a solitary goal from James Tavernier.

Steven Gerrard’s side will now turn their attention to the Europa League with a trip to Portugal to face Benfica on Matchday 3. The Gers have won both their opening Group D fixtures against Standard Liege and Lech Poznan and currently sit second in the standings, just behind Benfica on goal difference.

Rangers are currently unbeaten in 11 games against Portuguese sides in European competitions, winning each of the last three in a row. Benfica also have an excellent track record against Scottish sides, having won each of their last five games against such opposition.

Gerrard doesn’t have any serious injury issues to contend with heading into the midweek Europa League trip to Portugal. Nikola Katic is the only long-term absentee for the Gers with anterior cruciate ligament damage.

The veteran preserved yet another clean sheet with a sharp late save in the 1-0 win over Kilmarnock and remains an undisputed starter between the sticks for the Gers.

The skipper has been in terrific form this season and has always been one of the first names of Gerrard’s teamsheet.

The Swedish international put in an excellent shift at the back against Kilmarnock and deserves to start ahead of Balogun on Thursday night.

The former Brighton man contributed greatly to a fine defensive display away at Kilmarnock in the last game and remains a vital cog in Rangers’ backline.

The Croatian has evolved into a lethal weapon for Rangers down the left with his pinpoint deliveries into the box and should retain his place in the teamsheet against Benfica.

The veteran only played a cameo in the last game but is expected to return to the starting XI for the Europa League tie.

The Finnish international has been an absolute rock for Rangers in the midfield. He should be fresh to start on Thursday after being rested for the trip to Kilmarnock.

The Canadian star is very much a key component of the Gers midfield with his creativity and work rate. Rangers will need him to be at the top of his game against Benfica.

The Romanian playmaker was rested for the win away at Kilmarnock but is likely to start in the Europa League fixture.

The former Liverpool star has been instrumental in Rangers’ sensational start to the campaign and the fans will be expecting another top-drawer display from him in the Europa League.

Gerrard has preferred Roofe up top in the Europa League so far but he could opt to retain the Colombian hitman on the teamsheet heading into a daunting challenge against Benfica. 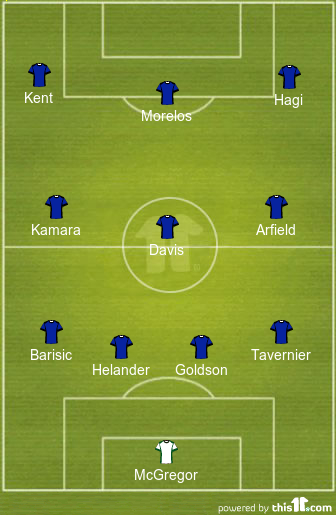