Mohamed Elyounoussi’s brace was not enough as Celtic squandered a two-goal lead in France to settle for a 2-2 draw against LOSC Lille on Matchday 2 of the UEFA Europa League on Thursday.

Neil Lennon’s side will now try to secure their treble from the Covid-curtailed 2019-20 campaign when they face Aberdeen in the semi-final of the Scottish Cup at Hampden Park. A victory on Sunday would put Celtic on track for a fourth successive domestic treble.

Celtic have failed to win any of their last four games in all competitions starting from the 2-0 home defeat against Rangers in the Old Firm derby. The Hoops were held to a 3-3 draw by Aberdeen in their previous outing in the Scottish Premiership and it remains to be seen whether the reigning champions manage to get the better of Derek McInnes’ side on Sunday.

Ryan Christie, Odsonne Edouard, and Nir Bitton all featured in the midweek Europa League tie after recovering from Covid-19 but Hatem Abd Elhamed is yet to recover fully from the illness. Christopher Jullien (back), James Forrest (ankle), and Mikey Johnston (knee) are all ruled out while Kristoffer Ajer is also unlikely to feature after suffering a groin strain on Thursday.

The Scotsman proved his worth with a series of excellent saves in the 2-2 draw against Lille and should retain his place against Aberdeen on Sunday.

The former Manchester City starlet put in a solid defensive shift in the Europa League tie and capped off an impressive overall display with an assist.

The Brighton loanee has been well below-par in the last few games and will be expected to show considerable improvement in the Scottish Cup semi-final.

The Israeli international put in a composed display at the back after relacing the injured Ajer midway through the 2-2 draw against Lille and should start on Sunday.

The Uruguayan put in an excellent shift at left-back in the Europa League tie and could be a key player for the Hoops against Aberdeen this weekend.

The skipper put his body on the line at every opportunity to help Celtic win a point against Lille and should once again be amongst the starters.

The Hoops graduate was at the top of his game on Thursday and will be expected to continue his good form in the Scottish Cup semi-final.

Ntcham looked quite exhausted against Lille so Lennon might as well rotate his squad and hand the vastly-experienced Australian a start on Sunday.

He worked really hard without much success in the Europa League but remains a key cog in Celtic’s creative cavalry.

The Southampton loanee has always been a regular starter and will be high on confidence after bagging a brace against Lille in the Europa League.

The Swiss international had a really good game against Lille before being taken off for Edouard, who looked visibly rusty on his return to the mix. Lennon should hand him a start ahead of the Frenchman on Sunday. 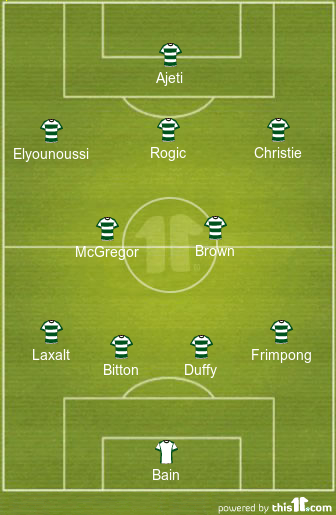