Real Madrid endured a dismal start to their European campaign with a shock 3-2 defeat at home against Ukrainian giants Shakhtar Donetsk on Matchday 1 of the UEFA Champions League.

The Los Blancos will now turn their attention back to the La Liga with a trip to Camp Nou for the first El Classico derby of the season on Saturday. Madrid kicked off their domestic campaign on a positive note with three wins out of four, before suffering a 1-0 loss against newly-promoted Cadiz last week.

Barcelona, meanwhile, will also be under pressure to bounce back after a 1-0 loss against Getafe in their previous La Liga outing, although the Catalan giants did demolish Ferencvaros 5-1 in the Champions League.

Zinedine Zidane has some major injury concerns heading into the weekend derby trip to Barcelona. Eden Hazard, Alvaro Odriozola, Dani Carvajal and Martin Odegaard are all ruled out while Mariano Diaz is doubtful to play a part on Saturday.

The Belgian made some exceptional saves in the 3-2 loss against Shakhtar and remains the undisputed No.1 between the sticks.

The Frenchman looked vulnerable in an unfamiliar right-back role in the last game but Zidane might as well give him another chance ahead of Nacho, with Ordiozola and Carvajal injured.

The veteran was nowhere near his best in the midweek fixture and will be expected to put in a better shift against Barcelona.

The World Cup winner had a night to forget against Shakhtar but he remains an indispensable component of Madrid’s backline.

An old warhorse of several El Clasico derbies over the years, the veteran should definitely return to the starting XI after being rested for the midweek clash.

The Brazilian was well below-par in the shock Champions League defeat but is expected to retain his place in the starting XI for the derby.

He came on as a substitute in the last game and offered more fluidity to Madrid’s midfield. The German is likely to be amongst the starters for the weekend derby.

The Croatian stalwart found the net with a world-class strike in a losing cause for Madrid in the last game and he will definitely be a player to watch out for on Saturday.

Luka Jovic started the Champions League tie but Benzema remains the undisputed first-choice No.9 for Zidane, who is unlikely to play any gambles at the weekend.

The Spaniard struggled to make much of an impact against Shakhtar and he will need to step up his game if Madrid are to get the better of Barcelona.

The youngster provided some much-needed spark to Madrid’s attack after coming off the bench in the Champions League debacle and Zidane should hand him a start for this one. 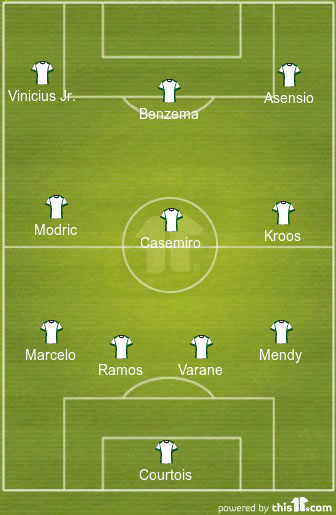