Barcelona romped home to a comfortable 5-1 win over Ferencvaros on Matchday 1 of the UEFA Champions League, thanks to goals from Lionel Messi, Ansu Fati, Philippe Coutinho, Pedri, and Ousmane Dembele.

The Catalan giants have made a positive start to their European campaign but they will be under pressure to get their domestic campaign back on track after suffering a shock 1-0 defeat against Getafe in the last game.

Things, however, will be far from easy for Ronald Koeman’s new-look side as they prepare to welcome Real Madrid for the first El Classico derby of the season at Camp Nou on Saturday. Barcelona are currently placed 9th in the La Liga with just two wins from their four opening fixtures.

Barcelona will once again miss the services of Marc-Andre Ter Stegen in goal, with the German yet to recover from his tendon injury. Jordi Alba, Matheus Fernandes, and Samuel Umtiti are all ruled out for the weekend derby but Koeman is expected to have a fully fit squad at his disposal other than that.

The Brazilian has done a decent job between the sticks in Ter-Stegen’s absence and should retain his place for the El Clasico.

The former United States starlet has chipped in with some quality displays early in the campaign. He could be set for an extended run in the starting XI due to Alba’s injury.

The Spaniard was substituted midway through the Champions League game after picking up a knock but it was more of a precautionary measure.

The Frenchman hasn’t been at his best in recent games. He will be expected to pull up his socks heading into the high-octane clash against Madrid.

The veteran got sent off against Ferencvaros in the Champions League but that won’t affect his availability for the El Clasico.

He came off the bench in the midweek fixture but should be back amongst the starters for the all-important clash on Saturday.

The Dutch international capped off a solid display in the middle of the park against Ferencvaros with a lovely assist for Ansu Fati’s goal. He will be expected to continue his good work at the weekend.

The 17-year-old has been in terrific form this season, scoring thrice in four league appearances so far. It will be interesting to see him in action in the derby.

The World Cup winner was left out of the Champions League tie but is expected to be back in the starting XI for this one.

The Brazilian has re-established himself in Barca’s set-up under Koeman this season and will be raring to go in the El Clasico after being rested for the midweek fixture.

The talisman converted coolly from the penalty spot on Tuesday night and Barcelona’s hopes in the derby will rest heavily on the veteran. 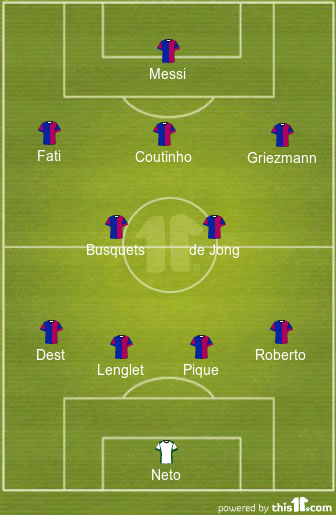