Leeds United take on Aston Villa in a Friday kickoff in the Premier League. Marco Bielsa’s men suffered a narrow loss against Wolves and will need to find a way to somehow stop the steamroller that Aston Villa are looking like this season.

The Villans haven’t lost one game and don’t look close to one soon. It will take a masterclass from the master tactician to end Aston Villa’s run.

Leeds received a massive setback when they learnt that Kalvin Phillips will be out for about a month with a shoulder injury. Diego Llorente still remains out for a while but Adam Foreshaw is just a minor doubt. Liam Cooper might be pushed into the game sooner than he should have but with defensive options running thin, Bielsa’s hands are tied.

Meslier retains his spot between the sticks despite conceding a goal in the last game.

The versatile man just has to keep switching from defence to midfield and vice-versa. Nonetheless, he does keep adjusting well to those transitions.

As mentioned earlier, a half-fit Cooper could well end up starting this game.

Will be the central most defender and is bound to have his hands full with Ollie Watkins.

Ayling should start in his familiar right-back role once again.

Will be required to cover for the talismanic Kalvin Phillips in defensive midfield.

Another important player for the team with his endless bags of energy. Winning his midfield battle with the opposite number will be vital.

Started his stint with the club well and will be hoping to get back on the score sheet but will have to play lower than his usual position.

The speedy winger will be vital to Leeds’ progression on the wings.

Switches to a more withdrawn role but will need to provide threat from the wide position.

It’s been a good start to the season for the former Chelsea man and with 3 goals in the last 5 league games, you would fancy him to get on the scoresheet again. 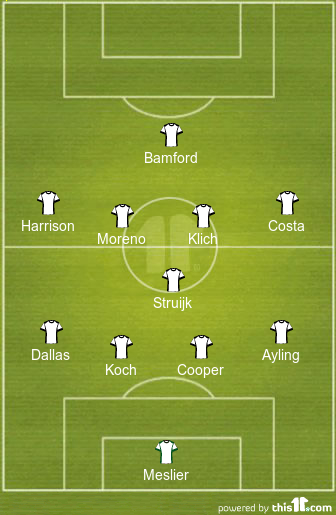