Rangers beat Celtic 2-0 in the first Old Firm derby of the season last week to go four points clear at the top of the Scottish Premiership standings, thanks to a brace from Connor Goldson.

Steven Gerrard’s side are now set to turn their attention to the Europa League with a trip to Belgium to face Standard Liege on Matchday 1. The last time that these two sides met in a European game was way back in 1961-62 when the Belgian outfit knocked the Gers out of the quarter-finals of the European Cup.

Rangers made it through to the last-16 of the competition in the previous campaign and they will be hoping to start their European adventure on a positive note this time around as well.

Rangers do not have too many injury worries heading into the Europa League trip to Belgium on Thursday. Kemar Roofe and Nikola Katic remain on the sidelines to nurse their respective injuries but Gerrard is expected to have a fully fit squad at his disposal other than that.

The veteran had very little to do between the sticks in the derby win and there shouldn’t be any question marks over his selection in the starting XI.

The Gers skipper put in an excellent shift at both ends of the pitch against Celtic and will be expected to continue his rich vein of form.

The former Brighton man is pretty much an undisputed starter for Gerrard’s side and he will be high on confidence after bagging a brace at Celtic Park last week.

The Swedish international proved his worth with several top-drawer performances in the Europa League last season and he should be among the starters for this one.

He wasn’t quite at his sparkling best against Celtic but the Croat remains a key player for the Gers with his ability to do a job at both ends of the pitch.

The Northern Irishman brings a lot of experience to Rangers’ midfield and that could be a decisive factor for them on Thursday.

The former Arsenal man has enjoyed a strong start to the campaign and Gerrard should continue to back him with regular starts.

He impressed with his tireless running up and down the pitch against Celtic and Rangers will need him to play a similar role in the Europa League tie.

The Romanian playmaker was only fit enough for the bench in the Old Firm derby but he should be ready to replace Barker on the teamsheet for this one.

The ex-Liverpool star remains an indispensable component of Rangers’ attack the fans will be expecting big things from him in the European games.

The Colombian boasts a stunning record in the Europa League and Rangers will need him to fire on all cylinders once again. 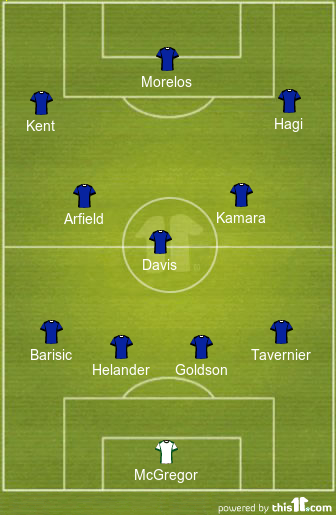