Predicted Chelsea XI to face Southampton in the Premier League

Chelsea are back in Premier League action as they square off against Southampton. The Blues romped to a victory in their last game against Crystal Palace, while Southampton also bagged the three points versus West Brom.

Fresh off the international break, both teams will be raring to go and continue the momentum they had. Surely an intriguing fixture to keep an eye on.

There is a big headache for Frank Lampard as Edouard Mendy picked up an injury while on national duty. Billy Gilmour still remains out with a long-term injury. Elsewhere, Hakim Ziyech might be in line to make his first appearance. Christian Pulisic is also back from injury and can be expected to line up. Ben Chilwell is available as well.

The error-prone Spaniard could be brought back as Mendy’s replacement due to his injury.

Could return to the starting lineup after sitting out the last game.

A solid showing versus palace and Thiago Silva will be hoping to build on that.

Had a great game alongside Silva and he might be the first choice for a while now. Looked very assured and calm.

Ben Chilwell has made a good start to his Chelsea career. He is a sure starter going by the form he has shown recently.

Kante is slowly getting into his stride and will hope for another assured performance in the middle of the park.

Looked quite good in the last game and topped it off with two penalties. An undisputed starter right now under Lampard.

Returns to his natural position as a number 10. Will be interesting to see how he dovetails with the likes of Ziyech and Pulisic.

Fans might finally get to see the former Ajax man in action for the first time since his arrival. Slots into his usual position on the right, replacing Callum Hudson-Odoi.

The striker looks short on confidence without a goal in the league. Should be helped by the fact that Ziyech and Pulisic are likely to start either side of him.

Pulisic might finally be back in action. Remains to be seen how he fares on his probable return. 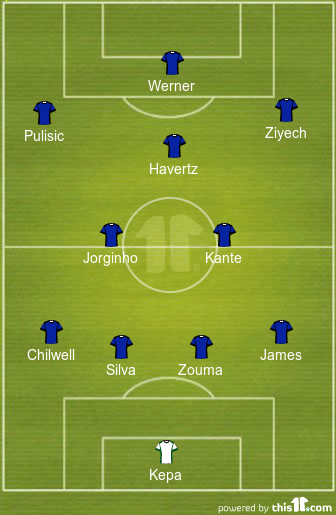