Predicted Celtic XI to face Rangers in the Scottish Premiership

Celtic will kick off proceedings after the international break with a trip to arch-rivals Rangers as the two powerhouses of Scottish football prepare to lock horns in the first Old Firm derby of the season this Saturday.

The Hoops are currently a point behind Steven Gerrard’s side in the standings with a game in hand and a victory at Ibrox this weekend will send them two points clear of the Gers. Celtic beat St. Johnstone 2-0 in their previous league outing while Rangers also secured three points against Ross County by a similar scoreline.

Neil Lennon faces several selection dilemmas heading into the Old Firm derby, with Ryan Christie, Odsonne Edouard, Hatem Abd Elhamed, and Nir Bitton all forced to self-isolate after contracting Covid-19. James Forrest (ankle) and Mikey Johnston (knee) are both ruled out while Albian Ajeti will be pushing for a return from his hamstring problem.

The Greek international has established himself as the undisputed first-choice between the sticks. He is likely to retain his position in the starting XI this weekend.

The Brighton loanee has been a figure of reliability at the heart of the defence for the Hoops and will be tasked with keeping Alfredo Morelos at bay.

The Frenchman remains a key cog in Celtic’s backline and he should be amongst the starters, with Elhamed ruled out.

The Norwegian starlet has impressed with multiple solid shifts at the back for the Hoops this season and there’s no reason why he should be dropped for this one.

An old warhorse of several Old Firm clashes over the past decade, Brown’s experience and composure in the middle of the park could well be a deciding factor on Saturday.

The Scottish international brings a lot to Lennon’s side with his creativity and work rate, making him a key asset to Celtic’s midfield.

The former Man City starlet has been an energetic presence down the flanks and it will be interesting to see how he copes with the threat of Ryan Kent.

Diego Laxalt came through the door during the international break but Taylor has been a regular at left wing-back. He should retain his place for the high-octane clash.

With Ryan Christie ruled out, the Frenchman is likely to get the nod ahead of David Turnbull to start in the No.10 role on Saturday.

The Southampton loanee has scored only once in 8 league appearances for Celtic so far this season but has done well in the European games.

The veteran hasn’t started a game for ages but Lennon should rely on his experience with Edouard ruled out and Ajeti still doubtful to be fully fit. 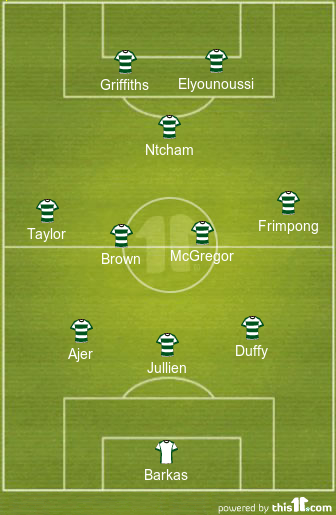