England will square off against Belgium in their 3rd match in Group B of the Nations League. After a close win against Iceland in the first game and a stalemate in the second one against Denmark, England will need to up the ante. On the other hand, Belgium have won both of their fixtures so far.

A lot of new names have been called up for these fixtures by Gareth Southgate and quite a few others have been recalled. The likes of Harvey Barnes and Dominic Calvert-Lewin could be in line for a start. Below, we take a look at the predicted England line-up for their game versus Belgium.

Jordan Pickford’s error-strewn form means that Dean Henderson could be manning the posts. The Manchester United man has 2 clean sheets in his 2 appearances in the EFL Cup.

Ben Chilwell put in a sizzling performance on his Premier League debut for Chelsea. The full-back will be hoping to start this important game.

It has been a good year for the Aston Villa defender. He has been a rock at the back for them.

Missed the last two games due to his incident in Greece. He will likely be brought back into the fold.

England have been blessed with too many good right-backs at this time. However, considering the form and opposition, Arnold edges this one out.

Kalvin Phillips might be a hot name right now but Declan Rice is as reliable as they come. Slots in as the deepest midfielder.

Despite an injury earlier, Henderson might be in for this match. His experience will be invaluable.

Harry Kane may not be having a good run in front of goal but his playmaking skills have been one to watch. Playing him as a second striker or attacking midfielder might bring a different dimension to England’s game.

Sterling can finally return to the flanks after slogging the last few matches as a centre-forward. .

Dominic Calvert-Lewin is in sensational form right now and after his fantastic debut performance against Wales in the friendly, he should get a start.

Rashford will need to start finding some form. The Belgium game can be a good place to do so. 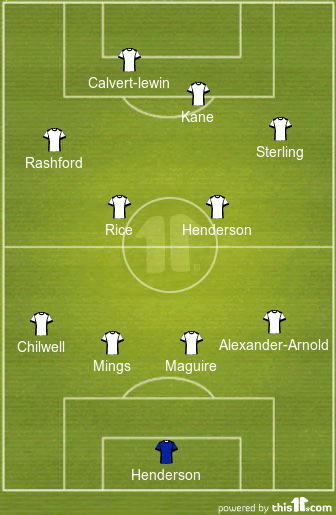