Rangers booked their seat in the group stages of the UEFA Europa League with a stunning 2-1 victory over Turkish giants Galatasaray, thanks to goals from Scott Arfield and James Tavernier.

Steven Gerrard’s side are now set to turn their focus back to the Scottish Premiership with a home fixture against Ross County on Sunday. Rangers are currently atop the league standings, just a point clear of arch-rivals Celtic, having played a game more.

Ross County have won only 3 of their 9 league games so far this season and the Gers will be the outright favourites to come away with all three points.

Joe Aribo (ankle) and Kemar Roofe (calf) are on the comeback trail from their respective injuries but are not expected to feature against Ross County on Sunday. Ryan Jack and Cedric Itten both came off the bench in the win over Galatasaray on Thursday night but are unlikely to be fit enough to start on Sunday.

Brandon Barker is back in training after recovering from his injury while Nikola Katic remains a long-term absentee due to his cruciate ligament injury.

The veteran has been the undisputed first-choice for the Gers over the last couple of seasons and should retain his place after another impressive display against Galatasaray.

The Rangers skipper capped off an excellent all-round display with a well-taken goal on Thursday. He will be high on confidence heading into the weekend clash against Ross County.

The Swede made some crucial interventions in the Europa League playoff tie and Gerrard should continue to back him with regular starts.

The former Brighton man remains one of Gerrard’s most trusted lieutenants at the back and there’s no way he’s going to be rested on Sunday.

The ex-Leicester City graduate caught the eye against Motherwell last season and Gerrard should hand him another start in place of Barisic, who deserves a rest after an energy-sapping 90 minutes in the midweek game.

The Finnish international was at the top of his game on Thursday and he should retain his place in the XI, with Ryan Jack yet to fully recover from his injury.

The Canadian veteran was one of the standout performers for the Gers against Galatasaray and has always been a regular fixture in the midfield.

Davis hardly put a foot wrong in the previous game and it looks unlikely that he will be rested, with Jack yet to regain full fitness and Aribo still out injured.

The Romanian playmaker will be looking to add to his tally of 1 goal and 4 assists in the Scottish Premiership when Rangers play host to Ross County on Sunday.

The former Liverpool man has already bagged 4 goals in 9 league games for the Gers and he will be high on confidence after another top-notch display against Galatasaray.

Rangers will once again rely heavily on their Colombian talisman to deliver the goods in front of goal, with Roofe yet to recover from his injury. 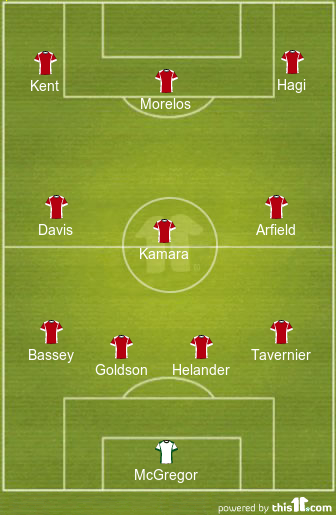