Tottenham will be in buoyant mood ahead of their clash vs Newcastle this weekend. They swept Southampton aside with a 5-goal fusillade as Harry Kane and Heung-Min Son ran riot.

Newcastle, on the other hand, are coming on the back of a thrashing they received from Brighton. It should be an easy one for Mourinho but Newcastle are known to frustrate opponents with their defensive shape.

Japhet Tanganga has been out of action for a while and will also likely miss out on this game. Fans might have to wait for a glimpse of their returning superstar, Gareth Bale, as he is likely to be out at least for two more weeks.

Mourinho will be hoping to field his newest acquisition, Sergio Reguilon at left-back. Other than that, there aren’t any injuries that would limit the Spurs boss’ selection.

Lloris has been Spurs’ No.1 and is going to continue as such. Made crucial saves in the last game.

The new addition has taken to Spurs like a duck to water. He has played in all the games so far and looks like he has cemented his place on the right.

Alderweireld may be brought back into the fold after the defensive lapses against Southampton. Davinson Sanchez makes way for him.

Holds on to his place but needs to perform much better if he is to keep his place.

Sergio Reguilon is an immensely talented player and if he is match fit, Mourinho would be wise to use him straightaway.

Will be the deepest lying midfielder of the 3. He will provide steel and protection to the back line.

Ndombele has been brought into the fold but looks a bit rusty. Another player who needs to keep improving to avoid being dropped again.

Mourinho might look to Dele Alli to provide creativity against a Newcastle side that drops deep and suffocates teams to deny them space. Alli will have to be Spurs’ creative hub if they are to crack Newcastle open.

Four assists and a goal. Need we say anything more. Kane looks like quite the playmaker these days. A sure starter versus Newcastle.

Four goals and an assist. Son absolutely threw caution to the wind and fed off Kane to dismantle Southampton. Will be hungry for more goals. 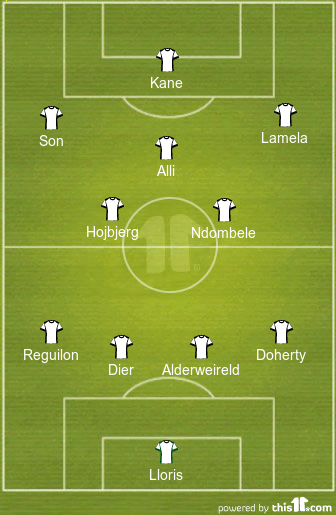