Predicted Liverpool XI to face Arsenal in the Premier League

Liverpool absolutely demolished Lincoln City 7-2 in the third round of the EFL Cup on Thursday night, thanks to braces from Takumi Minamino and Curtis Jones, while Xherdan Shaqiri, Marko Grujic, and Divock Origi all got their names on the scoresheet.

The Reds have started their title defence on a positive note, winning their first two Premier League fixtures against Leeds United and Chelsea respectively. Jurgen Klopp’s side will once again be the favourites to come away with all three points when they play host to Arsenal on Monday.

Liverpool have won each of their last four home league games against the Gunners at Anfield, although Mikel Arteta’s side did beat the Reds 2-1 back in July.

Jurgen Klopp will be expected to make several changes to the playing XI that started against Lincoln City in the League Cup on Saturday.

Alex Oxlade-Chamberlain (knee) and Joel Matip are both ruled out while Jordan Henderson is doubtful to play a part after suffering a thigh injury against Chelsea last week. Joe Gomez is expected to return to the mix after missing a couple of games due to a knee problem.

The Brazilian had a poor outing against Leeds United on the opening day but he should be high in confidence after keeping out Jorginho’s penalty in the 2-0 win over Chelsea.

The academy graduate has struggled to produce his best early in the ongoing campaign but he remains an undisputed starter for the Reds.

The England international is expected to return to the starting XI after missing the last two games due to a knee injury.

The Dutchman had very little to do in the EFL Cup rout of Lincoln City but he should be in for a much tougher test against Arsenal on Monday.

Kostas Tsimikas had a good outing in the domestic cup game but Robertson has always been the undisputed first-choice in that department.

The former Monaco star played in an unfamiliar centre-back role against Chelsea but he is likely to return to his usual No.6 role in the midfield.

He was one of the standout performers in Liverpool’s win over Chelsea last week and continues to be one of Klopp’s most trusted lieutenants in the middle.

The Guinean wasn’t quite at his sparkling best on the opening day win over Leeds United but he could get another start if Henderson doesn’t make it to the eleven.

The Egyptian wizard followed up his hat-trick against Leeds with a rather quiet display in the win over Chelsea and the fans will be expecting him to return to his best on Monday.

The Senegalese international was at the top of his game against Chelsea last week and should be raring to go against the Gunners after being rested for the EFL Cup tie.

The Brazilian is yet to find the net in the PL but he remains an essential cog in Liverpool’s attack. 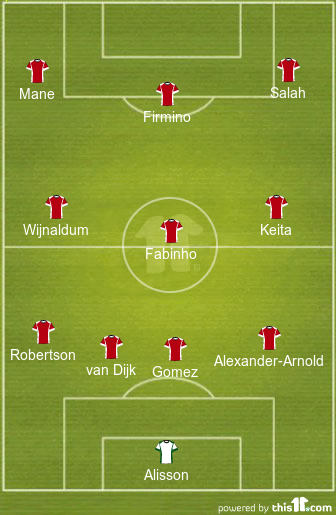