Chelsea absolutely demolished Championship outfit Barnsley 6-0 in the third round of the EFL Cup on Wednesday night, thanks to a hat-trick from Kai Havertz coupled with goals from Tammy Abraham, Ross Barkley, and Olivier Giroud.

Having suffered a 2-0 loss against champions Liverpool last week, the Blues will be the outright favourites this time around when they make the trip to the Hawthorns to face a struggling West Brom side.

The Baggies have lost three out of their four games in all competitions so far this season and face an uphill task to turn their fortunes around against Chelsea.

Frank Lampard doesn’t have any fresh injury concerns heading into the trip to Midlands. Hakim Ziyech (knee), Billy Gilmour (knee), and Christian Pulisic (thigh) are all ruled out while Marko van Ginkel remains a long-term absentee for the Blues.

Andreas Christensen is back in the reckoning, having missed the Carabao Cup tie due to a red card suspension.

Edouard Mendy has finally arrived at Chelsea and if Lampard chooses to, Kepa might well be axed for the new signing after the Spaniard’s shambolic performance against Liverpool.

The academy graduate has started Chelsea’s first two league games this season and he looks likely to replace Azpilicueta, who played the full 90 minutes on Wednesday.

The Frenchman came off the bench against Barnsley but is expected to feature as a starter on Saturday.

The former PSG man looked comfortable on his senior debut for Chelsea in the EFL Cup tie. The fixture against struggling West Brom presents the perfect opportunity for Lampard to hand the veteran his Premier League bow.

The England international made a positive impact as a substitute against Barnsley on his debut for the Blues and could replace Alonso on the teamsheet.

Kante wasn’t involved in the midweek cup tie but he remains a vital cog in Lampard’s midfield engine.

The Italian maestro wasn’t at the top of his game in the defeat against Liverpool but he should be hungry and ready to play a part in this game after being left out for the cup tie.

Chelsea’s blockbuster summer signing bagged a hat-trick against Barnsley to announce himself in English football and the fans will be expecting him to fire on all cylinders once again.

The talented academy graduate failed to get on the scoresheet in the midweek demolition of Barnsley but Lampard should continue to rely on him.

The England midfielder capped off an excellent all-round display on Wednesday night with a well-taken individual goal and he is certainly deserving of minutes in the league.

Tammy Abraham was quite outstanding against Barnsley but the German is still very much Chelsea’s first-choice No.9 and should start on Saturday after a good display against Liverpool last week. 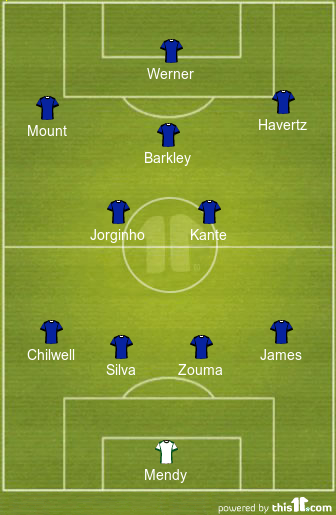