Predicted Liverpool XI to face Chelsea in the Premier League

Liverpool kicked off their Premier League title defense on a positive note with a hard-fought 4-3 victory over newly-promoted Leeds United last week.

Up next for Jurgen Klopp’s side is a trip to Stamford Bridge to face Chelsea on Sunday. The Reds will be confident of bagging all three points against Frank Lampard’s side after completing the league double over them last term.

Chelsea beat Brighton 3-1 on the opening day and it will be interesting to see how they fare against the reigning champions following a summer of heavy spending.

Jurgen Klopp has no fresh injury concerns heading into the trip to West London. Kostas Tsimikas (Covid-19) and Alex Oxlade-Chamberlain (Knee) are both ruled out while Xherdan Shaqiri (Muscular injury) is also doubtful to feature.

Liverpool’s undisputed No.1 looked rusty against Leeds United last week and he will be expected to return to his usual lofty standards when the Reds face off against Chelsea.

The youngster was unexpectedly poor at both ends of the pitch last week but he is expected to retain his position in the starting XI as a key cog in Klopp’s engine.

The Dutchman had a rare blemish against Leeds but there’s no way he’s going to be benched for the high-octane clash at Stamford Bridge on Sunday.

Joe Gomez wasn’t at his best in the previous game. So Klopp might just try to team up Matip with van Dijk at the heart of the defence.

The Scotsman was arguably the best performer at the back for the Reds in their 4-3 win over Leeds last week and should retain his place.

The Brazilian featured as a substitute last week but he should be back in the starting XI for the big game against Chelsea.

The Dutch international had a rather quiet game last time around and will be expected to rise to the occasion on Sunday.

The Reds skipper wasn’t at his sparkling best against Leeds and he will need to be at the top of his game against a well-drilled Chelsea midfield this weekend.

The Senegalese stalwart failed to make a big impression last week but he remains an indispensable component of Liverpool’s deadly front trio.

The Egyptian wizard kicked off the 2020-21 season with a bang and propelled Liverpool to victory over Leeds with a hat-trick.

Firmino brings a lot more to Liverpool’s attack than just goals and assists, thus making him a key player to watch out for at Stamford Bridge on Sunday. 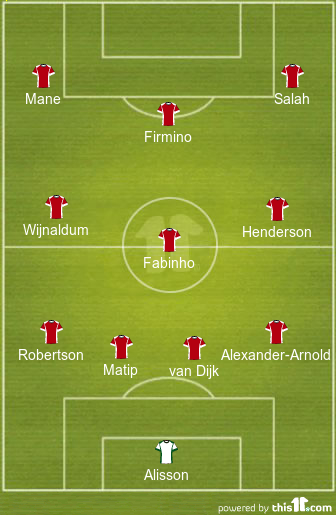