Predicted Celtic XI to face Livingston in the Scottish Premiership

Celtic came back from behind to register a hard-fought 2-1 win over St. Mirren in the Scottish Premiership on Wednesday night, thanks to goals from Shane Duffy and James Forrest.

Having closed the gap on arch-rivals Rangers to just three points atop the standings with a game in hand, Neil Lennon’s side will now play host to Livingston on Saturday.

The Hoops will be the outright favourites to come away with a victory against Gary Holt’s side, who lost 2-1 at home to Hamilton Academical in their last game.

Celtic don’t have any fresh injury concerns heading into the home fixture against Livingston at the weekend. Veteran striker Leigh Griffiths is on the comeback trail from his calf strain while Tom Rogic is working his way towards regaining full sharpness after missing the start of the season.

Mikey Johnston, who is yet to recover from his knee injury, is a long-term absentee for the Hoops.

The Greek international commanded his penalty area really well in the last game and deserves to keep his place as the club’s No.1 between the sticks.

The Brighton loanee is currently on a high after scoring in back-to-back league games for the Hoops. The fans will be hoping for him to continue his excellent run of form.

Hatem Abd Elhamed looked way too sloppy in the 2-1 win against St. Mirren. Lennon needs to rotate his squad and hand the Israeli star an opportunity to impress.

The Norwegian put in a solid shift at the back on Wednesday and he will be expected to keep up his good work when Celtic play host to Livingston.

The Scottish left-back struggled to make a big impact in the last game. He will be expected to pull up his socks on Saturday.

The former Manchester City starlet featured from the bench in Celtic’s victory over St. Mirren. But he is likely to get the nod ahead of James Forrest at right wing-back for this one.

Scott Brown has endured a sluggish start to the ongoing campaign and Lennon needs to rotate his squad to give the African star a chance to impress.

The Hoops graduate toiled hard and moved the ball quickly in the middle of the park on Wednesday. He definitely deserves to retain his place in the side.

Christie showed glimpses of his brilliance in the victory over St. Mirren and Lennon should continue to back him with regular starts.

Celtic’s talisman wasn’t at his sparkling best in the last game but he remains an indispensable component of the team’s forward line.

Patryk Klimala failed to impress in the win over St. Mirren so Lennon needs to give the Pole a breather for this one and hand a start to the former West Ham man. 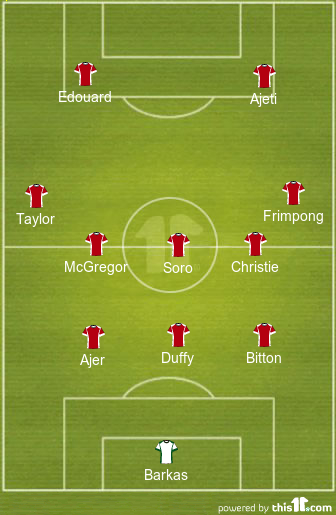