Manchester United finally return to action this season when they take on Crystal Palace in the Premier League. It has been close to a month since the Red Devils last played in a competitive game.

Crystal Palace won their first game against Southampton and will be in good spirits. United will have to be careful as to how they deal with Wilfried Zaha, who scored the winner in the Southampton game.

Axel Tuanzebe remains the only player confirmed to be out with injury. There are no such concerns with the rest of the squad. However, there are certain players who are doubtful to appear in the season opener.

Paul Pogba tested positive for COVID-19 and withdrew from France’s squad (source – ESPN). He will likely not start. Mason Greenwood was also mired in controversy during international duty and might not get the nod for Saturday’s fixture (source – Independent).

Despite an underwhelming season, De Gea is likely to remain the first choice between the sticks. Dean Henderson is back at the club but will mostly be playing second fiddle unless there is a drastic drop in De Gea’s performance.

What a signing Wan-Bissaka has been for United. The tough tackler has won over fans with his accurate tackling and defending.

Lindelof is going to form one half of the centre-back duo. He dropped a few stinkers last season but remains United’s second-best defender in the squad.

Maguire showed good leadership and improved the backline last season. He was also handed the captaincy and will look to build on from last season.

United felt the absence of Shaw in the last few games of the season due to his injury. However, he is back and will be hoping to start the game.

Matic got a new lease of life under Solskjaer when McTominay was injured. He has repaid the manager’s faith and will likely start ahead of McTominay.

Normally, Paul Pogba would be starting here but he is doubtful for this game and Fred will deputise in his absence.

Last season’s superstar, Fernandes breathed life into United’s season midway through it. There is no doubt about his place in the team.

Mason Greenwood might be overlooked for this game after what happened during the break. Daniel James will be hoping to capitalise on the same.

Martial was United’s top scorer last season and will be hoping to build on that.

Rashford had a mixed season, with his form dropping a bit after the COVID break. However, he did have a much better season compared to previous seasons and will again be United’s main man this time. 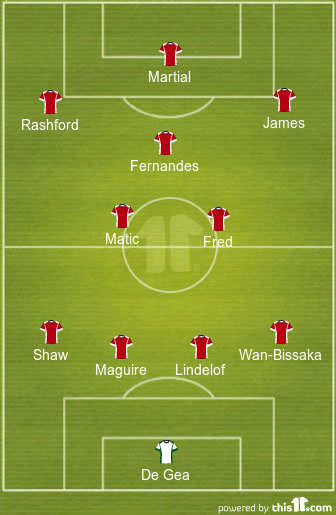