How Arsenal can line up with new signings next season

After a mixed 2019-20 season, Arsenal finally to be on the up under Mikel Arteta. Unai Emery was shown the door mid-season and Mikel Arteta was brought in from Manchester City.

It has taken time but the team is slowly looking better and better by each passing game. The players are taking to his philosophy and producing the desired results. Arsenal managed to bag the FA Cup and Community Shield, and defeated the likes of Man City, Chelsea, and Liverpool on the way.

The club have made some smart signings in the transfer window and the squad looks in good shape to deal with the challenges of next season. They have completed the signings of Gabriel Magalhaes and Willian. Centre-back William Saliba is back from his loan spell at Saint-Etienne.

Below we look at how Arsenal can accommodate the new signings as well as the likes of Aubameyang and Pepe in the starting lineup.

It is widely expected that Leno will return as first-choice between the posts after his return from injury. Emiliano Martinez can say he deserves the spot but it might not be enough to replace the German, who was in sublime touch before his injury.

A defensive revamp was needed at the club and the same happened. Gabriel and Saliba are likely to start most games given the error-prone nature of other centre-backs in the team. They will be joined by David Luiz in the middle.

While fans are divisive on Luiz because of his errors, he remains one of the best sweepers in the game. He can carry the ball out and spray passes from deep, which helps the team. With Gabriel on the left and Saliba on the right, he will have ample protection.

After a fantastic season, Kieran Tierney retains his place on the left side, while Bellerin should slot in on the right if he stays. Bellerin is being linked to PSG. Dani Ceballos and Granit Xhaka will be the two central midfielders ahead of the likes of Guendouzi and Torreira.

Former Chelsea man Willian slots in on the left despite his favoured position being the right-wing. This is to accommodate Pepe on the right, which would allow both players to play as inverted wingers and cut in while the wide players provide width.

Aubameyang is a no-brainer at the top of the attack after scoring 29 goals in 42 appearances. These three can easily switch places and become a fluid front three that can cause problems to the opposition.

Few high-profile players such as Alexandre Lacazette, Saka and Martinelli miss out but this line-up is definitely the strongest-looking for the London club and looks to be the preferred choice for Mikel Arteta. 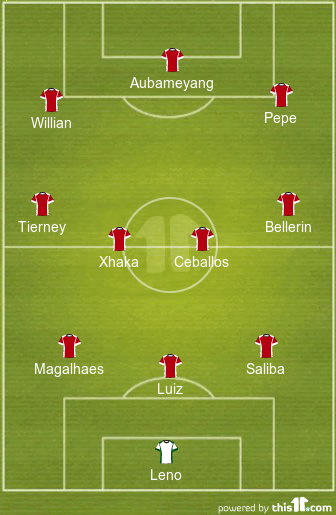