Celtic are set to host Kilmarnock on Saturday in the Scottish Premiership at Ibrox after their goalless draw against Livingston.

Steven Gerrard’s men dropped their first points of the new season and that could cost them dearly if they don’t manage to take maximum points on Wednesday. Nothing but a win would ensure them of safety in the title race.

On the other hand, Alex Dyer’s men would be hoping to get their first win of the season and this fixture wouldn’t be an easy one for the Gers.

Jermain Defoe and Nikola Katic will be the two notable absentees against Kilmarnock as they are still recovering from their respective injuries. Leon Balogun didn’t feature in the last game and is doubtful for the game against the Killies.

The summer signing has been the first choice in recent weeks. He has kept clean sheets in the league games he has started so far and would be hoping to continue with the same.

The Englishman will be leading the team from the back. Though his defending has been top-notch, the skipper needs to improve while going forward on the flank.

Goldson has been in brilliant form and is expected to lead the defence. He should be able to keep the Killies’ attack at bay.

The Swede’s return from a long absence has been a huge boost to the squad. He did well in the absence of Leon Balogun in the last outing and is expected to retain his spot.

The Croatian is one of the key players in the squad but he wasn’t effective against Livingston. He needs to put in enough crosses for his strikers and create opportunities.

The 28-year-old is one of the key figures in the squad and will be expected to take control of the midfield. He has been an undisputed and is likely to start on Saturday.

Kamara has been inconsistent in the last few outings. He will be key in breaking Kilmarnock’s attacks and should be able to help the backline.

The Nigerian was rested in the last outing but should return to the starting XI ahead of Scott Arfield, who seemed to be in poor form against Livingston.

Kent has been one of the regular starters but has found it difficult to get involved in the goals. He needs to improve his standards, which could be helpful in the attack.

The Romanian has not had the best of starts to the 2020/21 campaign. He needs to put a shift in this game and help them cross the line on Wednesday.

The young Swiss international did well when he came on from the bench in the last outing. He should be tried ahead of Alfredo Morelos, who has lacked the intensity in recent months. 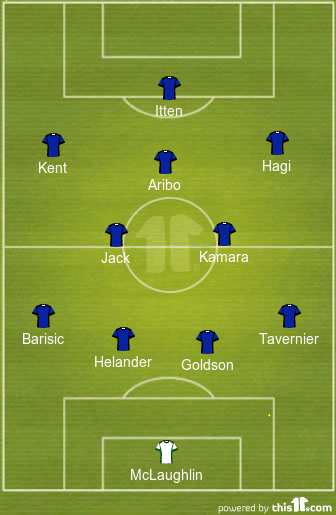