Having overcome the threat of Real Madrid, Manchester City are set to face Lyon in the quarterfinals of the Champions League.

Pep Guardiola’s men have been brilliant in the European competition this season and have a really good chance to lift the trophy for the first time. A win would ensure their progress to the next round, proving a point that Manchester City are capable of producing the goods on the European stage.

On the other hand, having come so far in the competition, Lyon would also be eyeing to make it further and it would definitely not be an easy task for the English outfit.

While all of the key players are available for this fixture, Sergio Aguero will be a notable absentee. The striker is still recovering from a knee injury and his return to the squad still remains unknown.

The Brazilian has been in sensational form this season, earning the Premier League Golden Glove award. He is the first choice in goal for City and will be hoping to stop Lyon from scoring.

The former Tottenham man is an essential player for City and should be able to help his side at both ends of the pitch.

With Nicolas Otamendi and John Stones completely out of form, Fernandinho is their main central defender. He will be leading the team from the back.

The Frenchman is their key defender and his return to the squad has helped them with their defensive errors. He should be able to help his side keep a clean sheet and progress further.

Mendy was suspended for the game against Real Madrid but should return to the squad ahead of Joao Cancelo at left-back. He should do well at both ends of the pitch.

Though the Spaniard didn’t enjoy the best of the seasons, he has been a key member and should be able to stop the flow of Lyon’s attacks.

One of the prized assets of the team, the Belgian international will be a key figure in this game. He should be able to break open Lyon’s defence and create opportunities for the forwards.

The 29-year-old would complete the midfield as he did in the last outing. His experience will play a key role in the absence of David Silva.

With a change in position in the last game, the Brazilian was brilliant and managed to disrupt Madrid’s defence. He needs to continue with the same form against Lyon.

Ever-present in the starting XI, Sterling will be expected to score goals against Lyon. He has established himself as a key member in the squad and should be able to take them across the line.

The future of City, Foden has shown great composure in big games and has featured in several positions. He should be leading the line as he did in the last outing. 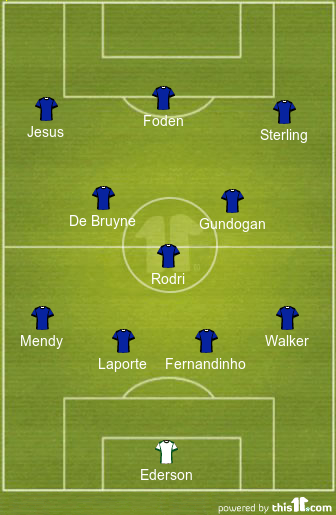