Predicted Wolves XI to face Sevilla in the Europa League

Wolves booked their seats in the quarter-final of the 2019-20 UEFA Europa League with a hard-fought 1-0 victory (2-1 aggregate) over Olympiacos in the second leg of the round-of-16 tie, thanks to Raul Jimenez’s penalty.

The Europa League will now take the form of a mini-tournament in Germany due to the delay caused by the pandemic, with the remainder of the fixtures set to played as one-legged ties. Nuno Espirito Santo’s brigade face off against Sevilla on Tuesday night.

The West Midlands outfit are in the quarter-final of a European competition for the first time since the 1971-72 UEFA Cup and they face an uphill task against the La Liga opposition, who are unbeaten in 18 games across all competitions.

Jonny Otto Castro was forced off with a knee injury early in the last-16 second-leg against Olympiacos and he is unlikely to be fit for the quarter-final clash on Tuesday. Apart from that, Nuno Santo doesn’t have any other serious injury issues to contend with.

The Portuguese shot-stopper made several key saves against Olympiacos in the second leg of the last-16 tie and has always been a reliable figure between the sticks for Wolves.

The Wolves skipper put in another solid shift at the heart of the defence in the last game after enjoying a consistent run in the Premier League.

The Frenchman was instrumental in the 1-0 win for Wolves against Olympiacos with several key interventions. There’s no way he’s going to be dropped for the quarter-final clash against Sevilla.

The Moroccan international has done exceedingly well over the course of the campaign, playing in an unfamiliar defensive role. He is expected to retain his place in the starting eleven after another solid display against Olympiacos.

The Irishman wasn’t at his sparkling best in the previous game but he is the best player Wolves have got in that position.

The 23-year-old didn’t really have the best of outings for Wolves in the last game but he remains a key cog in Nuno Santo’s midfield cavalry.

The Portuguese veteran showed a lot of character and resilience in the 1-0 win over Olympiacos. Wolves will need him to bring all his experience into play when they lock horns with Sevilla on Tuesday.

The youngster put in a decent shift in the last game after replacing the injured Jonny Castro. He is expected to retain his place, with the Spaniard unlikely to be fit for the upcoming fixture.

The former Barcelona graduate failed to make a massive impact against Olympiacos but Wolves will rely heavily on him to deliver the goods on Tuesday.

The diminutive winger won the penalty that led to Jimenez’s goal in the win over Olympiacos and Nuno Santo should definitely start him ahead of Jota in the next game.

Wolves’ undisputed No.9 was once again on target from the penalty spot in the last game as he scored his 27th goal of the 2019-20 season. A lot will depend on the Mexican as the Midlands outfit bid to put Sevilla to the sword. 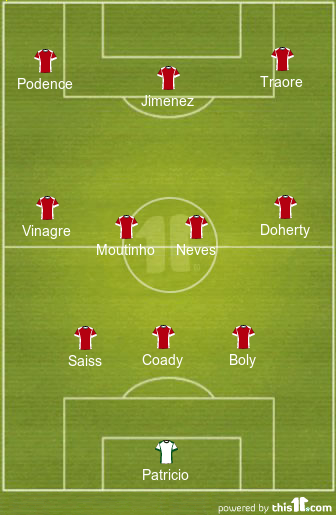