Speaking to Bleacher Report, Liverpool youngster Ki-Jana Hoever has admitted that he is weighing up his options carefully ahead of the start of the upcoming 2020-21 campaign. The 18-year-old is considering a loan move away from Anfield to further his development with more regular game time, although he is yet to make a concrete decision on his future. (h/t Bleacher Report)

The Dutch starlet has also set a target for himself to play 30 games next season if he ends up going out on loan and that is something Reds boss Jurgen Klopp needs to think about.

Born in Amsterdam, Ki-Jana Hoever started his youth career at AZ Alkmaar and had a four-year stint at Ajax before joining Liverpool’s youth system back in the summer of 2018.

The Dutch defender initially impressed for the Reds’ U-18 side and also shone in the UEFA Youth League before earning promotion to the U-23s in the Premier League 2. Hoever made his professional debut for Liverpool against Wolves in the FA Cup back in January 2019, replacing an injured Dejan Lovren in the opening minutes of an eventual 2-1 defeat.

Hoever, who signed a long-term deal with Liverpool last year, scored his first professional goal for the Reds in an EFL Cup game against MK Dons, thus becoming the fourth-youngest goalscorer for the club.

The 18-year-old has also represented the Netherlands across various age-group levels up to U-18s, having participated at the 2019 UEFA U17 European Championship in Ireland. 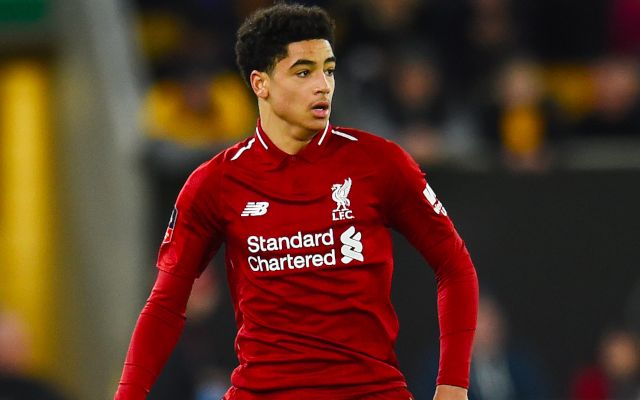 Liverpool’s current scenario at the back

As per the report, Hoever sees himself as a right-back by trade who can occasionally play as a centre-back. Trent Alexander-Arnold is expected to continue as the first-choice right-back for the Premier League champions next term after yet another impressive campaign with academy prospect Neco Williams as the designated understudy.

That means Hoever is currently way down the pecking order as far as the right-back department is concerned while the presence of established names like Virgil van Dijk, Joe Gomez and Joel Matip will make it difficult for the youngster to challenge for a role at the heart of the defence.

Loan deal – a fair settlement for all parties?

Ki-Jana Hoever has shown glimpses of his potential over the course of his short career at Anfield but he needs to play competitive football week in, week out to develop his game.

Sitting on the bench at Anfield and playing in a few domestic cup games isn’t going to do him a world of good. That’s exactly the reason why a loan move to a lower division club, preferably in the Championship or League One, would be in the best interests of all parties involved.