Celtic Predicted XI to face Kilmarnock in the Premiership

Celtic travel to Rugby Park as they take on Alex Dyer’s Kilmarnock side in the second round of the Scottish Premiership.

Neil Lennon’s men started off their title defence with a bang, scoring 5 past Hamilton and should be able to continue with the same form on Sunday. They will look to make it two wins in two games and keep their momentum going.

On the other hand, the Killies would be hoping to salvage a point from the games as they narrowly lost 2-1 to Hibernians in the last outing.

Winger Mikey Johnston is set to remain on the sidelines after undergoing a calf surgery. Ivorian Vakoun Issouf Bayo will also be absent on Sunday after picking up a hamstring injury in pre-season.

The Scottish international is expected to retain his spot as Vasilis Barkas just arrived at Celtic Park and will need time to settle.

The Dutch teenager was in sensational form in the last outing. He played a key role at both ends of the pitch and will need to continue with the same form on Sunday.

The Norwegian has firmly established himself as a key man at the heart of the Hoops defence. He is an undoubted starter and will have to do better than what he did against Hamilton.

The 27-year-old was at fault for the only goal Celtic conceded in the last outing. However, he has been rock-solid at the back and will partner Ajer in central defence.

The former Killies’ man has slowly started to integrate himself into the squad. He provided two assists in the last outing but had some defensive lapses. He needs to be at his best against his former side.

The 35-year-old’s experience will be key in this fixture. He has been ever-present for the Hoops in midfield and will be leading the team.

McGregor will be playing in a deeper position as he usually does. He will be key in breaking Kilmarnock’s attacks and should be able to help in defence also.

He will be their leader in the creative department. After an impressive 2019/20 campaign, Christie got off the mark in the new season with an assist last week. He will be expected to create a lot of opportunities for his forwards.

The Southampton loanee did not have the best of games against Hamilton. He should be able to contribute adequately to their attack.

The Scotsman will retain his spot and will be expected to put in a lot of crosses for the strikers.

A lethal striker, Edouard got off to a brilliant start in the new campaign with a hat-trick in the first game. He will be leading the line and should be able to score a few more on Sunday. 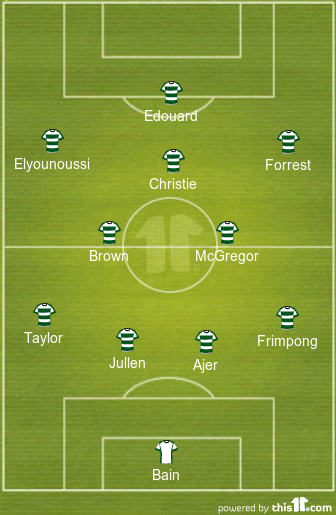