Manchester United are set to host Austrian side LASK at Old Trafford for the second leg of the Europe League last-16 tie on Thursday.

Ole Gunnar Solskjaer’s men have a commanding 5-0 lead after the first-leg and the manager should use this opportunity to give the main players a rest. He should bring in the fringe players and hand them an opportunity to show what they are capable of doing.

United need to be at their best for the remainder of the campaign as they have only one shot at glory after falling to Chelsea’s dominance in the FA Cup semifinals.

Luke Shaw was forced out of action against Southampton due to an ankle injury and is set to continue on the sidelines. Axel Tuanzebe and Phil Jones haven’t featured since the restart and are doubtful for the game on Thursday.

The Argentine has been the first-choice in goal for United in the cup competitions. He is expected to start against LASK and will be hoping to keep another clean sheet.

The Portuguese youngster hasn’t lived up to the expectations at United but this fixture will be a chance to stake his claim under Solskjaer.

Bailly was brilliant since his return from injury but he hasn’t been able to move up the pecking order ahead of Harry Maguire and Victor Lindelof. The Ivorian should be given another chance in this fixture.

The Swedish international should lead United’s defence as Maguire is not expected to start on Thursday.

With Shaw yet to return, Williams is likely to continue on the left side of the defence. He needs to help the team at both ends of the pitch and improve his quality.

The Brazilian is one of the most improved players in the squad but didn’t get the opportunity since the restart. He is likely to return to the starting XI on Thursday.

The Scottish international performed well in the absence of Paul Pogba before the restart but saw limited opportunities in the latter stages of the campaign. He will be an undoubted starter for this fixture.

James got off to a good start to his United career but lost his place to emerging talent mason Greenwood. The Welshman was on target in the previous meeting between the two sides and should look to score a few more to boost his confidence going into the new season.

The Spaniard is likely to start ahead of Portuguese sensation Bruno Fernandes. Mata hasn’t featured in a long while and this could be a chance to prove his worth to the manager.

The 27-year-old contributed with just one goal in the league this season and has endured one of his poorest campaigns so far. He should take advantage of the limited opportunities he gets.

The Nigerian has done well whenever called upon and has already scored a handful of goals for United. He will be leading the attacking and should be able to score a few more. 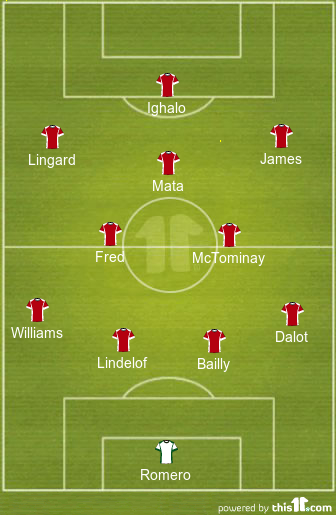