Fulham are set to face Brentford in the Championship playoff final on Wednesday as they seek to return to the top-flight.

Despite Scott Parker’s men underperforming in the last outing against Cardiff City, they managed to reach the finals with a better aggregate. But this time, they cannot afford to put in a sloppy performance. They need to get back to their best form if they are to achieve their goal.

Brentford, on the other hand, have been in brilliant form and this game will definitely be a test for the Cottagers.

The manager would be happy to see that all of his payers are available for selection. None of the squad members is injured or suspended.

Despite struggling in the first half of the campaign, the Slovakian has managed to claim the spot for himself. He has already kept 15 clean sheets throughout the campaign and would be hoping to keep another one in the final.

The Irish international started in both the legs of the semifinals ahead of Denis Odoi. He is expected to make it to the starting XI on Wednesday and should be at his best against Said Benrahma.

The former Reading ace is currently in a good run of form and started in both the games against Cardiff City. He is likely to get the nod ahead of Alfie Mawson.

The 32-year-old USA international has been a regular starter throughout the campaign. He is one of the undisputed starters in the game and should be able to keep Ollie Watkins quiet for 90 minutes.

Bryan has been excellent for the Cottagers this season, providing 7 assists. He will be expected to continue at his best and put in crosses for the strikers.

Tom Cairney is immense and is a crucial figure in this Fulham team. He has led the team brilliantly as is one of the best players in the squad. He should start for sure.

The Southampton loanee has made the best use of his loan spell, featuring regularly. He has been a shield in front of the frontline and will be key in cutting out Brentford’s string of attacks.

The 23-year-old played a significant role in Fulham reaching the final. He will be expected to break open the Bees defence and should manage to create a lot of opportunities for the forwards.

The Frenchman has been in sensational form for Fulham, scoring 3 goals and 5 assists. He is expected to start against the Cottagers as he did in the semifinals.

The former Genk man is currently in a rich vein of form and has made the difference, scoring a goal in each of the semifinals. He will be expected to carry the team forward once again.

The Serbian has returned to training after missing the last two games. He will be leading their line and will be heavily depended upon for the goals. 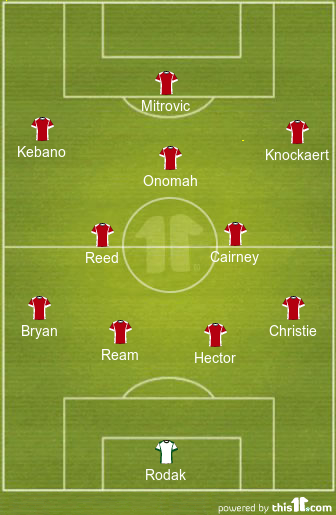