Celtic begin their chase for an unprecedented 10th league title with a home game against Hamilton Academical on Sunday.

Neil Lennon’s men did not have the best of starts to their pre-season in France, where they first drew against Nice and then lost the next two games. However, they ended the pre-season on a high note with two wins and that should boost their confidence to the start of the new season.

Hamilton, on the other hand, would also be hoping to do better as they finished just 4 points ahead of the relegated Heart of Midlothian.

Youngster Vakoun Issouf Bayo ended up picking an injury in pre-season and is set to be on the sidelines. Mikey Johnston, who struggled with injuries last season, underwent calf surgery a few weeks back. He isn’t expected to return any time soon.

Despite signing Vasilis Barkas, the Hoops should go in with Scott Bain as he has trained with the team recently. He should be able to get them off to a good start with a clean sheet.

Frimpong is the first-choice right-back for the Hoops. He made himself known in the latter stages of last season and managed to rack up 2 goals and 3 assists. He will be key while joining the team’s attack from the back.

The Norwegian had a stellar 2019/20 campaign and seems to be in good form. He will be an undoubted starter.

Jullien was a regular member of the squad last season, forming a strong partnership with Ajer. They will be hoping to keep their good record intact.

The 22-year-old picked up a knock in pre-season but has returned to training. He is expected to start ahead of Boli Bolingoli-Mbombo.

At 35, he seems to be going strong and will be leading Celtic once again this term in their chase for the 10th consecutive league title.

The Scottish international played a significant role in their 9th consecutive league title last season. He has been key in their midfield for the last couple of years and will look to add more this season right from the game against Hamilton.

The 25-year-old will lead Celtic’s creative department. He managed to score 11 goals and provide 11 assists last campaign and should be hoping to do even better this term.

The Norway international struggled with a knee injury and should make the best use of his chances. However, with a good performance in the pre-season, he is expected to start on Sunday.

The 29-year-old finished as the Hoops’ top assist-provider last season. He is one of the key players in the squad and his experience would be crucial for Lennon’s side.

The Frenchman is their main striker and led the team to success last season with 21 goals. With experience, he should be able to improve. He will be expected to score, given his good run of form. 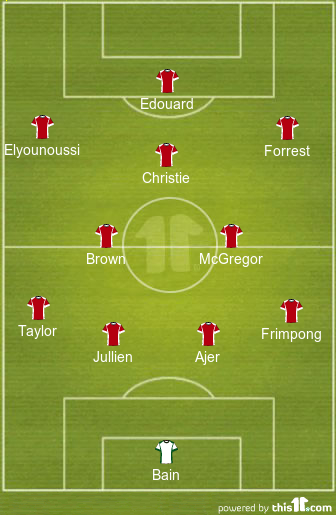