Brentford are set to face local rivals Fulham in a crucial Championship playoff final on Wednesday at Wembley.

Thomas Frank’s men have been brilliant throughout the season and were able to overcome a first-leg 1-0 loss against Swansea City. Nothing but a win would guarantee them top-flight status for the first time in 73 years and they need to be at their best.

On the other hand, Fulham would also be seeking to return to the Premier League and this will not be an easy task for the Bees as their opponents have been here before on several occasions and will look to take advantage.

Rico Henry was cleared of his red card and was available to the team in the semifinal. Nikolaos Karelis will be the only absentee as he is still recovering from a knee injury.

The Spaniard has been the first-choice in goal for the Bees. He managed to keep 16 clean sheets in the regular season and will be key against Fulham on Wednesday.

The Danish international has been in sensational form this season. He is an undoubted starter and will be key at both ends of the pitch.

The former Leeds United man will be leading the team from the back. He was at fault for Swansea City’s goal in the playoff second-leg but needs to be at his best and keep out Aleksandar Mitrovic.

The 27-year-old has formed a strong partnership with Jansson in the heart of Brentford’s defence. He has also scored a few goals this season and should retain his spot.

Henry was at his best against the Swans in the semifinal and provided an assist that sealed their win. He should start for sure and will be expected to play a key role while joining the team’s attack.

The former Fiorentina man will be key in breaking Fulham’s attacks. He has performed well throughout the season and needs to be at his best in the final.

Marcondes has been one of the best players for Brentford this term with 7 assists. He also played a key role in their win in the last outing, scoring the second of their three goals. He should be able to break open Fulham’s defence.

The 24-year-old will partner Marcondes and Norgaard in the midfield as he has done throughout the campaign.

Since arriving in Griffin Park last summer, the French U20 international has fixed the spot for himself. His most important goal of the season came in the last outing and will be expected to continue with the same form.

With 17 goals and 9 assists, the Algerian has been one of the most influential figures in Brentford’s successful campaign. He is an undisputed starter and should be able to take his side to the top-flight.

Watkins will be leading the line and the former Exeter City man should manage to score a few goals on Wednesday. He has been their talisman throughout the campaign and needs to be at his best for one last time this season. 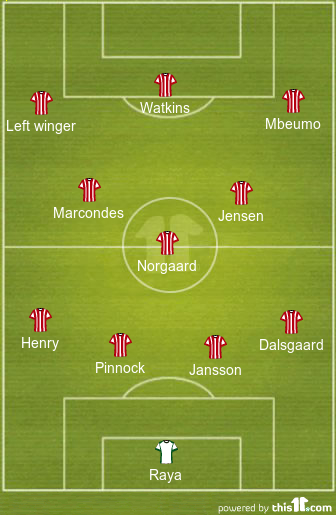