Having secured a Champions League qualification spot, Chelsea are set to face Arsenal in the FA Cup final on Saturday. This will be the Blues’ ninth Cup final in the last 20 years.

Frank Lampard’s men will be entering the game on the back of a 2-0 victory over Wolves on the league’s final day. This would be the only shot at glory for the Blues as they are on the verge of an exit from the Champions League.

Arsenal, on the other hand, would also be hoping to lift the trophy for the 14th time in their history and the London derby will be an exciting contest.

N’Golo Kante is racing against time to be fit for this fixture but a lot will depend upon his matchday fitness. Young Billy Gilmour underwent knee surgery and is set to remain on the sidelines for a longer spell. Willian is also doubtful as he missed the last game against Wolves.

With Kepa Arrizabalaga underperforming, Lampard handed the Argentine a start in the last outing. He is expected to retain his spot in goal for the Blues.

Azpilicueta has been a key figure in the squad. He will be leading the team from the back and will be expected to contribute at both ends of the pitch.

With limited options in the heart of the defence, the Frenchman will start for sure ahead of Fikayo Tomori and Andreas Christensen. He needs to be strong against Arsenal’s frontline led by Pierre-Emerick Aubameyang.

The German international is the only player with a better defensive record for Chelsea, at the moment. He will be an undoubted starter.

The Spaniard, who has been on the receiving end for the majority of the campaign, has done well since the restart. He is expected to retain his spot to complete the backline.

Jorginho has started frequently in the last few weeks due to the absence of Kante. He needs to be at his best and play a key role in breaking the Gunners attack.

The former Real Madrid man has been ever-present in Chelsea’s midfield this season. He has done well so far and will be expected to continue with the same form on Saturday.

The Englishman has done a decent job so far whenever called upon. He should be given the nod ahead of the others.

With Willian doubtful, Mount is expected to move to the right side of the attack. He has operated from the wide areas on several occasions and should be able to break open Arsenal’s defence.

The USA international seems to be slowly settling to the conditions in England’s top-flight. He was in devasting form against Liverpool and is capable of causing trouble to the opponent’s backline. He will be a key player in this fixture.

Giroud’s form since the restart has made him the first-choice striker in the last few weeks. He should be leading the line against his former side and get his name on the score sheet. 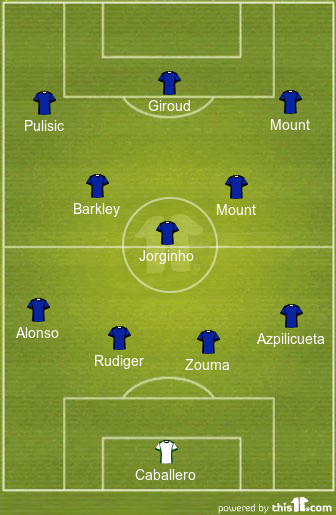