Jurgen Klopp’s Liverpool lifted the Premier League title for the first time in the modern era and this season has been quite different from every other campaign, especially with the enforced break.

With the season done and dusted, several players have once again turned out to be the saviours of their respective teams. While Manchester United and Chelsea fought hard until the final day to secure a Champions League spot, Aston Villa had to wait till the final whistle to be guaranteed top-flight status.

Promoted side Sheffield United were one of the surprise packages in the league as they outshone several top clubs. And this season didn’t fail to entertain despite the challenges due to the outbreak of the pandemic.

PL Team of the season

Though Ederson and Alisson lifted their standards to the next level, young Pope stood out for Burnley this season. He was sensational in the Clarets’ good run of form as they were beaten in just 2 of their last 16 league games but was unluckily pipped to the Golden Glove by Manchester City’s Brazilian goalkeeper Ederson.

One of the best in the business, the English youngster is a worthy winner in this position. He was instrumental at both ends of the pitch as Liverpool won the title. He finished second behind Kevin De Bruyne in the assists chart, with 13 to his name.

Despite being 32, Basham started in all of the league games for Sheffield United this season and played a key role in the Blades’ rise to the top. Though his teammates Jack O’Connell and John Egan are also worthy of being included in this list, the former Blackpool man stood apart from all.

Though he was not at the same level as he was last year, Van Dijk was ever-present in the Reds defence and helped his team concede the fewest goals in the league this season. He has been influential in Klopp’s side since his arrival.

Like Alexander-Arnold, the Scottish international was a driving force for the team from behind. He has taken his game to the next level and no one comes near him for this spot.

Having been awarded the PL player of the year, Henderson cannot be missed from this list. His leadership qualities on the pitch in the last few seasons have been outstanding and he has led the team amazingly.

The Belgian has been sensational throughout the campaign and is the heartbeat of City’s squad. With his 20 assists in the league, he joined Thierry Henry in an elite list for the most assists in a single Premier League season.

None of the January signings in Premier League’s history has been as influential as Fernandes. While he arrived, United were 14 points behind Leicester City but his 8 goals and 7 assists helped United qualify for the Champions League. And after winning two back-to-back Player of the Month awards, the Portuguese cannot be excluded from this list.

Salah, as usual, completed another splendid campaign with 19 goals and 10 assists and if not for his brilliance at the top, Liverpool wouldn’t have dominated the league this season.

The Gabonese international was the only bright spot in Arsenal’s poor campaign and he ended up one goal short of Jamie Vardy. His brilliance against Pep Guardiola’s side also helped them reach the finals of the FA Cup.

Vardy couldn’t help his side secure a Champions League spot but he was the reason why Leicester were in contention for that spot in the first place. His 23 goals earned him the Golden Boot award and he has been the best striker in the league this season. 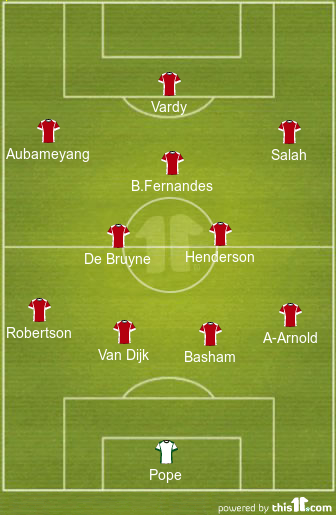