Arsenal travel to the West Midlands to face Aston Villa on Tuesday at Villa Park in a Premier League encounter.

Mikel Arteta’s men have been brilliant in the last few weeks except for the North London derby loss. They have managed to topple Liverpool and Manchester City, and a win on Tuesday would boost their hopes of qualifying for the Europa League. They need to capitalize on the small momentum they have and get the job done with just a couple of games remaining.

On the other hand, Villa are fighting a battle against relegation and would be hoping to take maximum points from the game.

Injuries have been a concern for the manager throughout the campaign. Calum Chambers, Gabriel Martinelli and Pablo Mari haven’t returned since the restart as they continue to recover. Bernd Leno also picked up an injury last month and is set to miss this fixture.

Matteo Guendouzi has not featured since the game against Brighton and is doubtful for this clash. Shkodran Mustafi was forced out of action against Manchester City and may not be available for selection.

The Argentine shot-stopper has made the best use of leno’s injury and would be a tough competitor when the German returns. For now, he is the preferred choice and will remain in goal for Arsenal on Tuesday.

With Mustafi injured and doubtful, Holding must get the nod ahead of the others. He has done well in the few opportunities he has received in the league this term.

The former Chelsea man seemed to be a different player against City in the FA Cup and held his line strong amidst whatever Pep Guardiola’s side threw at him. With the same form, he could be their leader in defence for the near future. He is expected to start against Villa.

The Scottish international has been one of the best players since the restart. He seems to have claimed his spot in Arteta’s starting XI.

Soares should be given the nod ahead of Bellerin as the Portuguese international needs game time to boost his confidence. He hadn’t played for a long time due to injury and needs to get more minutes under his belt.

One of the promising young talents in the country, Saka has been sensational for the Gunners so far. At this time, he needs to be playing more. He missed out on the last outing but should be handed a start on Tuesday.

Xhaka’s redemption under Arteta has been swift. He has been an undisputed starter in recent weeks and has improved a lot. His experience will be key in this fixture.

The Uruguayan’s return from injury has been a huge boost to the squad. He will be playing a key role in breaking Villa’s attack.

The youngster is yet to feature regularly under the Spanish tactician. He was brilliant against Liverpool a few days back and needs to develop himself.

The 31-year-old has not put a foot wrong since his arrival in London. He is Arsenal’s key player, having already scored 20 goals in the league so far. He is an undoubted starter.

Having served his suspension, Nketiah should be leading the line. The youngster has done well so far and regular game time would help him progress. 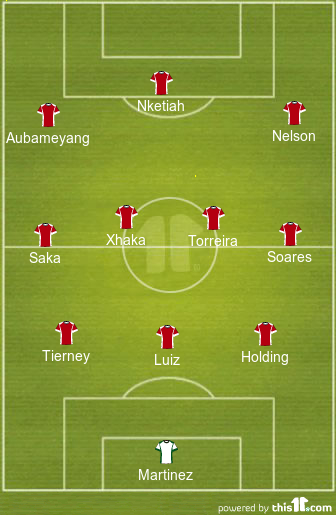