Arsenal are set to face Tottenham on Sunday in a grueling North London derby in an away Premier League fixture.

After a loss to Brighton on their return from a break, Mikel Arteta’s men have had a decent run so far. However, a win against their rivals on Sunday would be helpful in their chances of qualifying for the Europa League next season.

On the other hand, Spurs would also be hoping to take maximum points from the North London derby to ensure a respectable finish at the end of the campaign.

Injuries have been a major concern for Arteta throughout the campaign. Calum Chambers, Gabriel Martinelli and Mesut Ozil haven’t taken part since the restart and are set to continue on the sidelines.

Pablo Mari and Bernd Leno will be notable absentees from the games and Eddie Nketiah will also not be available for selection after receiving his marching orders in the last outing against Leicester City.

Leno’s injury has made way for the Argentine shot-stopper to showcase his talent. He has been at his best in recent times and will definitely start in goal for the Gunners.

The German international looked to be a different player against the Foxes last time out. He has done a decent job in the last couple of games and should be given the nod ahead of the others to boost his confidence.

Though Luiz has been prone to errors throughout the campaign, he has been starting regularly. He needs to be on top of his game to keep Harry Kane and co. at bay.

With Tierney playing in a slightly higher position, Kolasinac would be the man to fill in the final position in the three-man defence. He was solid in the game against the Foxes and needs to continue with his good form.

The Spaniard has not been consistent since his return from injury but he is expected to retain his spot.

The former Celtic man has been excellent at both ends of the pitch. His return to the squad after a long layoff has been a huge boost for Arsenal on the left side of the pitch.

The 27-year-old will be key in breaking Tottenham’s attacks and needs to be at his best to stop Jose Mourinho’s men entering into their box.

After a slow start to his spell at Arsenal, Ceballos has time and again risen for the Gunners. He has been lively since the restart of the games and almost dictates their play in the middle of the park. He will be an undoubted starter on Sunday.

A versatile player, the teenager has been brilliant in any position the manager asked him to play in. He is one of the best players in the team and is likely to start on the right-wing.

The 31-year-old added one more to his goal tally against Leicester but couldn’t help his team across the line. The captain will be expected to score as always and he needs to find the back of the net to keep his team within the Europa League qualification spot.

The Frenchman has struggled and also lost his place to Eddie Nketiah in recent times. He will be leading the line in the absence of the youngster and needs to prove himself. 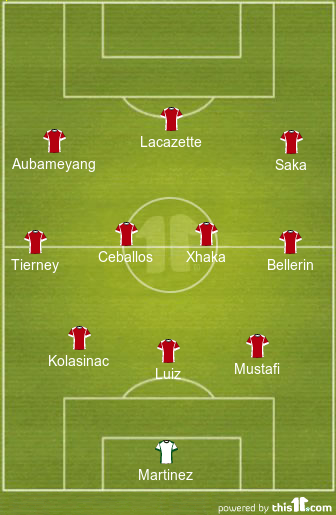