After a win against West Ham last week, Tottenham travel to Bramall Lane on Wednesday to face Sheffield United in the Premier League.

Jose Mourinho’s men will be entering this game on the back of a 2-0 victory over the Hammers. Since the restart, the Lilywhites have done a decent job. However, a win on Wednesday would help them in their hopes of moving closer to the top-four finish.

On the other hand, the Blades haven’t been convincing since returning from the enforced break. But they are likely to cause troubles to Tottenham as they would be hoping to return to winning ways.

Mourinho would not be too worried since most of his main players are available for selection against the Blades. Juan Foyth and Troy Parrott are recovering from their injuries and are set to miss the action. Japhet Tanganga, who injured his lower back, will also be absent on Wednesday.

The Frenchman has established himself in goal for Spurs. He will be leading the team from the back as he is the first-choice shot-stopper.

Aurier is the only right-back available at the moment and he will be an undoubted starter. However, the Ivorian needs to work on his end product whenever he joins the team’s attack.

The 24-year-old Colombian has been selected regularly since Mourinho’s arrival and needs to step up his game to claim the spot for himself.

The Englishman has been brilliant in the last few games. He has been given the nod ahead of Toby Alderweireld and Jan Vertonghen and is likely to retain his spot in the heart of the defence.

Davies’ return to the squad after a long break has been a boost to the manager, who had little options at left-back. He will be an undoubted starter and will be relied upon at both ends of the pitch.

The Argentine was one of the best players in the last outing and has been the creative spark in the team. He should start ahead of Harry winks.

The French midfielder will be key in stopping Sheffield United’s attacks. He has been brilliant in the last couple of games and should be able to continue with the fine form for the remainder of the campaign.

The former PSV Eindhoven man started from the bench in the previous outing. But given his form, he should be given the nod ahead of Lucas Moura. The Dutchman has 3 goals from 7 appearances so far. He has been a valuable addition to Tottenham’s squad.

Alli wasn’t at his best since returning from suspension. But he is one of the few players who could cause damage to any defence. He should be able to break open the opponent’s defence.

The South Korean international is a prized asset for the Lilywhites. He is an undoubted starter.

Kane will be the lone striker. The Englishman should be able to get on the scoresheet and build his confidence for the remainder of the campaign. 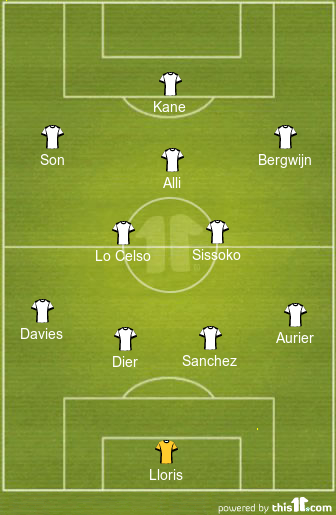