The game between the two sides is definitely something football fans will be looking for. The fixture will be an exciting one and it will be interesting to see who wins the battle.

Joel Matip and James Milner might miss out, having picked up knocks in the Merseyside derby against Everton.

The Brazilian keeper has managed to keep a clean sheet in his last two games for the Reds and would be looking to keep up the momentum.

The youngster is one of the best right-backs in Europe and has been solid in the defence.

Joe Gomez will be at the heart of the Liverpool defence as the club look to enjoy their well-deserved title win with a game against Manchester City.

The Dutchman will be raring to put in another strong display and will take the responsibility of leading from behind.

The player has been crucial for the Reds this season and will retain his place at left-back.

Fabinho will play the role of a deep-lying playmaker and will be crucial in this game against tough opponents.

The skipper has lots of experience under his belt and Liverpool will use his experience in the middle of the part to break into City’s final third.

Wijnaldum has been a key player, having featured for the Reds in 30 of the 31 league games this season. The player will be a strong presence in the clash against Manchester City.

Salah has been a key player for Liverpool, and the fans will be hoping the Egyptian scores in this game to stay in the hunt for the Golden Boot.

Mane is a player who has the ability to single-handedly win games for his side. Liverpool will be banking on the player to cause Man City’s defence some trouble.

Roberto Firmino will lead the Reds up front and has the ability to cause damage to any defence. He will share the workload with Salah and Mane to find the back of the net. 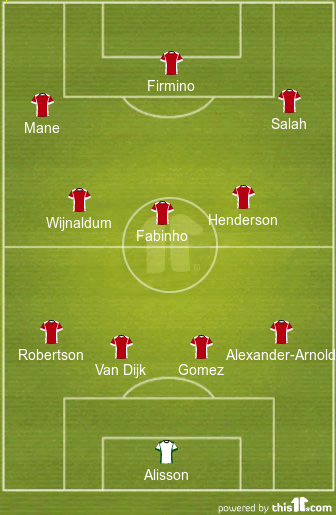