Leeds United are set to face Luton Town at Elland Road on Tuesday in the Championship as both sides need to take maximum points.

Marcelo Bielsa’s men are entering this fixture on the back of a thumping victory over Fulham. They have moved to the top of the table, extending their lead to three points over fellow promotion-chasers West Brom.

On the other hand, Luton are facing a relegation battle and would be hoping to take all 3 points. They have been unbeaten in their last four games and would make it difficult for the Whites.

The youngster will continue to deputize in the absence of the suspended Kiko Casilla. He would be hoping to keep another clean sheet on Tuesday.

Ayling is the only established right-back available at the manager’s disposal and will be an undoubted starter. He needs to be involved in the team’s attack from the back. He has 4 goals and 4 assists this season.

Despite taking a blow to his face in the last outing, the Brighton loanee remained strong and looked a cut above the others. He is expected to retain his spot and will be crucial again at the back.

The captain has been outstanding throughout the campaign, forming a solid partnership with White. He will be leading the team from the back and should help the team with another clean sheet.

The 29-year-old is one of the few players to have started in every league game so far. His experience and quality will be required at both ends of the pitch.

The Yorkshire-born midfielder is one of the best players in the Championship. He will be an undoubted starter and will be key in breaking the opponent’s attack.

Harrison has been in brilliant form this season, scoring 6 goals and providing one assist. And the same will be expected of him on Tuesday.

Though he has been brilliant in the campaign with 4 goals and 4 assists, his form in the last two outings hasn’t been convincing. A regular starter, the Polish international needs to be at the thick of the things.

The Spaniard’s return to the squad has been a massive boost. He will be key in unlocking Luton’s defence open and will be expected to be their creative mastermind.

The Wolves loanee managed to provide am assist in the previous game and will be expected to continue in the same vein. He is their only established right-winger and is expected to retain his spot.

Bamford is their leading goal scorer this season with 14 goals. He will be the lone striker up front and would be hoping to add to his tally. 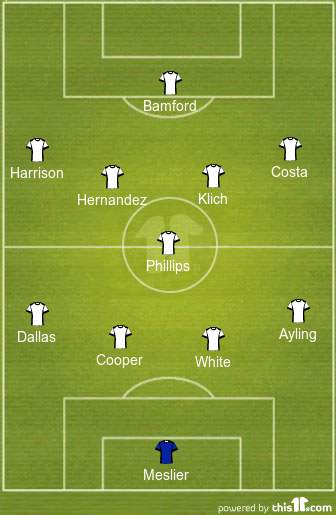