Arsenal have endured a disappointing campaign so far as they currently lie 10th in the league standings (at the time of writing). However, they seemed to be on a positive note since the turn of the year.

However, they have now lost two games since the restart, to Manchester City and Brighton respectively. They need to improve drastically next season if they are to be successful. For that to happen, Gunners boss Mikel Arteta should bring in new faces to the squad.

Atletico Madrid’s Thomas Partey has been long linked with a move to the Emirates, as per The Metro. He is one of their main targets in a bid to bolster their midfield. Turkey international Orkun Kokcu has also attracted a lot of interest from the English club, who are still leading the race for his signature, as per Football.london.

As the defence has been a major concern for the manager, Reims centre-back Axel Disasi is being courted by the Gunners, as per the Metro.

The German has been the first-choice shot-stopper for the Gunners since his arrival and is likely to remain as the No.1 under Arteta next season.

The La Masia academy prospect has been troubled by injuries for the past couple of seasons but he is their best choice at right-back. He should be a regular starter if he is free from injuries.

With David Luiz set to leave the Emirates this summer, as per Daily Mail, Sokratis should take the leadership duties at the back. He is more experienced than the others and will need to take his game to the next level.

The French youngster has enjoyed a brilliant season with Reims this season. He is one of the main reasons the French outfit conceded the fewest goals (21) in Ligue 1 this term. And his youthful presence would be a boost for Arteta’s backline.

The teenager has been brilliant in the absence of Kieran Tierney and Sead Kolasinac for the majority of the 2019/20 campaign. He should be given enough chances as he is capable of working wonders in the team’s attack.

Partey has been the glue that has kept Atletico’s midfield together. He has taken his game to the next level and could be a huge presence in the middle of the park for the Gunners. He has been in scintillating form in the last two seasons.

The Uruguayan should be picked ahead of the other midfielders in the squad. He was at his best before he picked up a season-ending injury.

Despite being young, Kokcu has taken the Eredivisie by storm this term. His creativity hasn’t gone unnoticed and he could be the perfect replacement for Mesut Ozil. The Turkish star has racked up 3 goals and 6 assists in 35 games this term and that could only get better with experience.

The captain’s future at the Emirates is uncertain right now. He should be kept hold of and is one of the first names on the team sheet.

Pepe seems to have been reborn under Arteta and the winger could be a game-changer for them next season.

The former Lyon man has not had the best of campaigns this term but he is capable of leading the attack. He needs to make changes to his game that could be helpful for the squad. 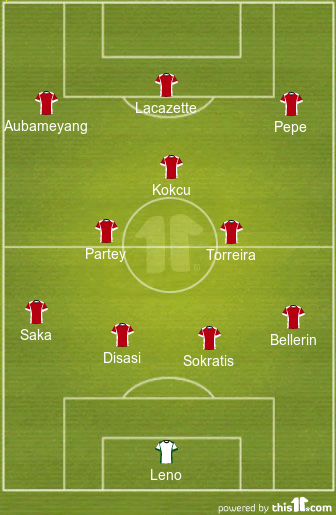