Sheffield United travel to Tyneside as they take on Newcastle United on Sunday evening at St. James’ Park.

Chris Wilder’s men were unfortunate in the game against Aston Villa as they would have leapfrogged Manchester United in the league standings. They did a decent job in the previous outing but couldn’t find a goal.

However, against the Magpies, they need to be at their best and do everything possible to take away three huge points.

Jack O’Connell missed the game against Villa after colliding with Dean Henderson in training and is likely to be absent on Sunday also. And John Fleck is also doubtful for the game.

Henderson, as usual, was at his best in the 0-0 draw against the Villans. He is likely to retain his spot in goal.

The absence of O’ Connell has helped him receive game time and that is likely to happen again. He did well in keeping the opponent at bay on Wednesday.

The 31-year-old has been solid at the back for the Blades and should start for sure.

The Irishman has time and again proved his worth at the back for Sheffield United. He is one of their best players in defence and backed it up with a solid performance on Wednesday. He will retain his spot.

One of the few players in the squad who has featured in every single minute, Baldock, was successful in keeping Jack Grealish quiet the other day. He has 4 assists this term and will be counted upon to provide a few more against the Magpies.

John Fleck’s absence has allowed the young Norwegian with some game time. He is likely to retain his spot on Sunday.

The Englishman has established himself as a key player in the middle of the park under Wilder. He will be key in unlocking Newcastle’s defence open.

Unlucky to not get the goal against Villa, Norwood’s presence will be a huge boost to the squad. he has featured in every league game so far and should be an undoubted starter.

Stevens was not at his best in creating opportunities against the Villans. He needs to take his game to the next level on Sunday and help the team in attack.

The Frenchman should be given the nod ahead of Billy Sharp. He is capable of working wonders upfront and already has 5 goals to his name this term.

McBurnie failed to score for the seventh time in a row in the league on Wednesday. He should look  to add to his tally of four goals on Sunday and help Blades cross the line. 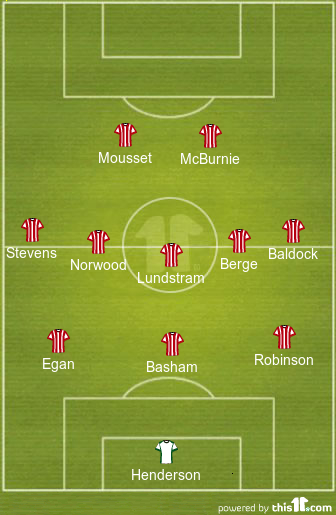