Tottenham, who will be looking to make a push to get into the top 4, will face rivals Manchester United as Premier League restarts.

Jose Mourinho is one manager who had benefitted by the break as key strikers Harry Kane and Son Heung-min were both injured and would have missed games.

But now with both of them back to full fitness, Mourinho will be looking forward to their active participation in a vital clash.

Japhet Tanganga is ruled out with a stress fracture while Dele Alli will miss the match due to a one-match ban.

The captain is almost certain to start between the sticks and will be the team’s vocal presence.

Aurier is the best available option at the right and is likely to take up that spot.

The Belgian’s contract expires in a couple of weeks, but it is likely the experienced man gets to start in a vital clash against Manchester United.

Alderweireld should partner with Vertonghen in an import game. The duo has vast playing experience, something the club needs.

Davies will play a key role in the match as they face a top-notch attack from United.

Eric Dier will guard the defence and will be vital in the midfield for Tottenham as they look to keep the United attack at bay.

Sissoko has been a regular in the Tottenham midfield and is likely to continue to hold the spot. The midfield will have a big task ahead of them and Sissoko will have a key role to play.

Lamela hasn’t been seen much this season, having started only 10 times for the club this season. With Dele Alli suspended, Lamela will be tasked with making the play.

The Dutch youngster arrived at Tottenham in January and has impressed the fans with his skills. The youngster will be important as Tottenham will look to find space inside the Manchester United box.

Son has completely recovered from his fractured arm against Aston Villa early this year, a game in which he was in good form. The player will be looking to fire.

It is very certain that Kane will be back to lead the attack. 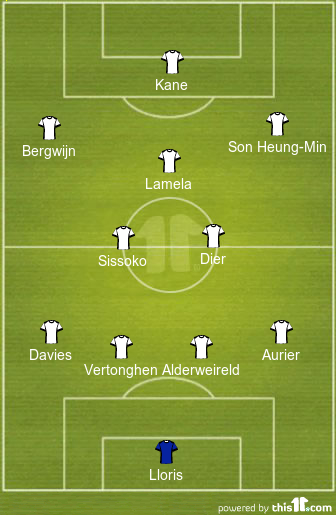