Premier League Team of the Year for 2019/20 season

The Premier League 2019/20 season is a few months away from its conclusion as it is currently suspended due to the coronavirus pandemic. However, its winners are all but confirmed, with Jurgen Klopp’s Liverpool on course to lift their first-ever Premier League title in the modern era.

The PFA Team of the Year is sure to be dominated by the Reds due to their breathtaking performances. However, let’s take a look at the other players from the top-flight who would be a part of this team.

PL Team of the Year

Although Alisson has been in fine form, the Manchester United loanee deserves this spot due to his heroics for the Blades. It is mainly because of his contribution that Sheffield United are in 7th position in the league standings. He has an average of 2.59 saves per match and has kept 10 clean sheets so far.

He has been phenomenal for the Reds in the past two seasons and his forward runs have been impressive. Having made 12 assists so far, the English youngster is far ahead of anyone in the race for this position.

A year back, Soyuncu was the third-choice centre-back for Leicester City but he has now established himself in the heart of the Foxes defence, forming a strong partnership with Jonny Evans. He has been impressive this season and is one of the most sought-after defenders in Europe.

The Dutchman is one of the best in the business and was impressive after Joel Matip was forced out of action due to injury. Van Dijk is the least surprising name in this list and rightly deserves a spot in this team.

Robertson, along with Alexander-Arnold has become the threshold of Klopp’s attacking system. The duo has been impressive in its pressing and attacking. The Scottish international has 7 assists in the league so far.

Despite competition from James Maddison and Georginio Wijnaldum, the Aston Villa skipper deserves to be named in the list. With 7 goals and 6 assists to his name, Grealish has single-handedly bailed out Villa on several occasions.

Henderson has been the heartbeat of Klopp’s team and his absence was evident in the hard-fought victory over West Ham. He has also contributed with 8 vital goals this term and has made his importance known in creating goalscoring opportunities as well.

The Belgian playmaker would surely be one of the first names in the team. He is the league’s top assist provider with 16 to his name and has also netted 8 crucial goals for Manchester City. He is of the most consistent players in the league this season.

The Senegalese international was, without a doubt, Klopp’s best player before a minor injury forced him out of action. He demonstrated his importance once again on his return by scoring some crucial winners in their chase for the title. He has racked up 13 goals and 6 assists this term.

Aubameyang has had a tremendous influence in Arsenal’s good form of late. With a brace against Everton, the Gabon international joined Leicester’s Jamie Vardy as the league’s top scorer (17 goals).

The 33-year-old has terrorized several top defenders in the top-flight with his speed and is the main man behind Leicester City’s success this season. He has netted 17 goals and helped the Foxes to 3rd position in the league standings. 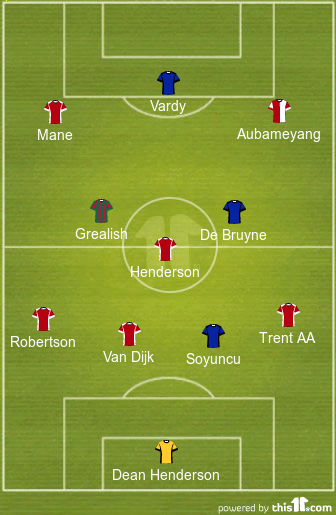